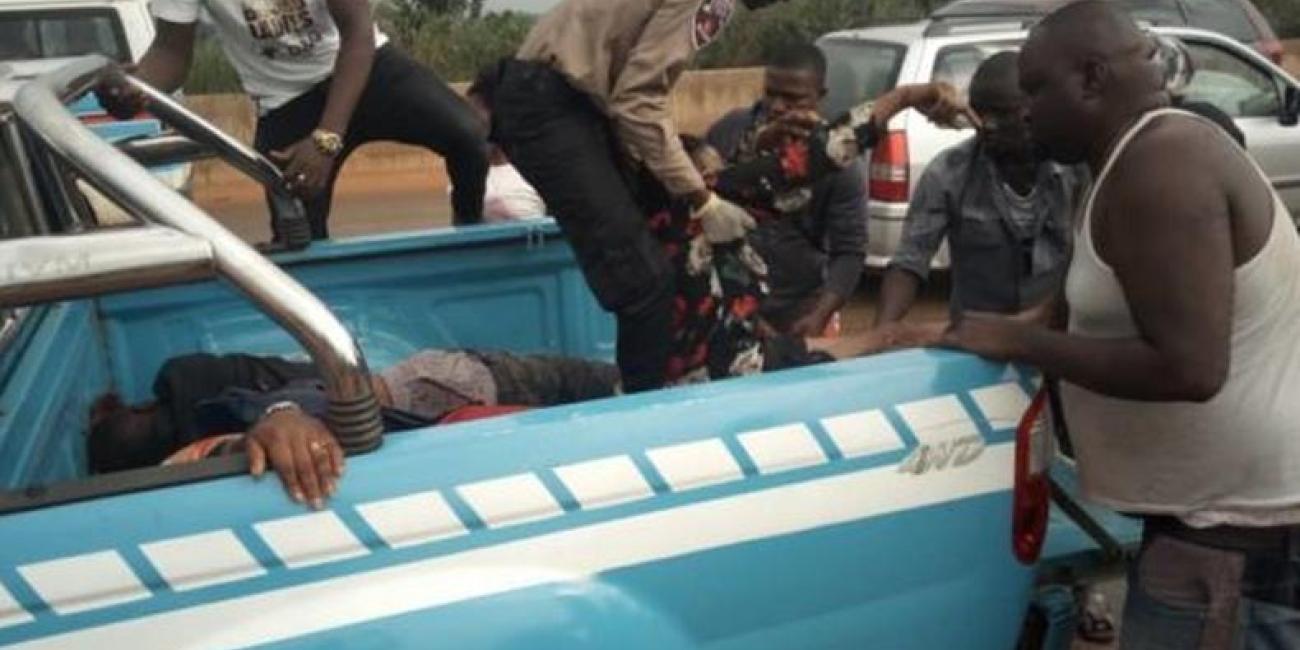 No fewer than 11 people were burnt to death in a fatal explosion that occurred on Thursday in the Ochadamu area in Kogi State.
Applesbite had reported how a Dangote Company coal truck that had brake failure hit a fuel tanker parked at a military checkpoint, causing an explosion that killed people and destroyed many vehicles.

The Federal Road Safety Corps, in a statement issued through its spokesperson, Bisi Kazeem, confirmed that 20 vehicles comprising a truck, a tanker, 12 cars, and six bikes were burnt during the explosion.

Kazeem explained that further investigation revealed that the main cause of the crash and subsequent fire outbreak that claimed the lives of the victims were road obstruction and brake failure.

Owing to the ill-fated auto crash, the Acting Corps Marshal, FRSC, Dauda Biu, called on drivers, vehicle owners and fleet operators to imbibe the safe culture of carrying out routine maintenance on their vehicles.

The statement obtained by SaharaReporters on Thursday night read, “As at the time of this statement, the emergency rescue team of the Corps has concluded the rescue of the injured persons to the hospital while the burnt victims were also evacuated.

“The Corps Marshal has directed adequate deployment of personnel to ensure prompt clearing of obstructions and free flow of traffic on the affected part of the road.

“While decrying the dangers and damages that come from poor vehicle maintenance, wanton neglect of signs and warnings about mechanical deficiencies in the vehicle and driving against legal speed limit, the Acting Corps Marshal further directed Commanding Officers to intensify sensitisation and routine inspection for all fleet operators nationwide.

“He concluded by admonishing the public to always patronise the FRSC toll-free line 122 and the National Traffic Radio 107.1 FM which are always available for all road users to report emergencies at any given time.”

Applesbite on Thursday reported the fatal accident and explosion that occurred along Lokoja-Anyigba/Itobe Highway in the Ofu Local Government Area of Kogi State, said to have involved a Dangote Company coal truck.

Applesbite also reported how a roadblock set up by military personnel on the highway had caused the fatal accident that claimed lives.

According to an eyewitness, the road was blocked by a diesel tanker whose phone was seized by the military personnel at the checkpoint.

“What really was that at that point? These checkpoints used to be there, all these military checkpoints. So what really happened was that one of the drivers, those tankers, whether one of his boys or the driver himself, collected his handset because he was making a call while coming to the checkpoint. When they collected his handset, they refused to give him and that was why he blocked the road. So while he was protesting, he decided to block the road,” the source had said.

The witness added that a Dangote truck which had a brake failure hit the tanker, causing the explosion.

He continued: “When he blocked the road, other vehicles decided to find their ways to get across. So at that moment, a Dangote truck was carrying coal, and as the truck was coming, the vehicle’s brakes failed and hit the tanker and the tanker was carrying diesel. And the tanker fell and all of the sudden, the fire ignited other cars that had been waiting to manoeuvre their way.”

The source went on to say that no emergency services were available at the accident scene for more than two hours while he was there.

“As at the time I am reporting, I have not seen any Federal Road Safety or Fire Service, in fact, there is nothing like rescue officials here. Though the police were here, there was nothing for them to do. The incident happened around 3 pm and at the time I was reporting, it was around 5 pm.”