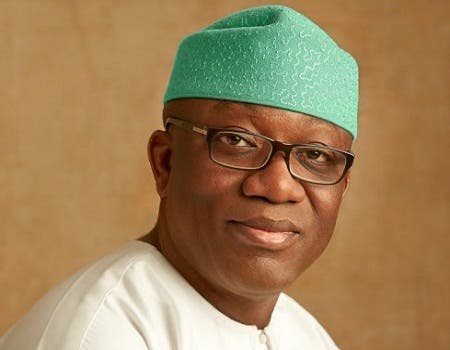 The widely speculated ambition of the Ekiti State Governor, Dr. Kayode Fayemi to run for president in 2023 is causing more than ripples within the ranks and files of the All Progressive Congress in the state.

The APC had endorsed Governor Fayemi for the presidential race, saying time has come for the president to come from Ekiti, adding that it would no longer play second fiddle in the southwest’s politics.
Next Read: Nigeria: Transport Cares Continue to Rise – NBS

The party’s state Chairman, Barr. Paul Omotosho through the spokesman, Hon. Ade Ajayi said that the governor has paid his dues in the ruling APC and Nigeria’s political firmament at large, thus deserve to be entrusted with the responsibility of leading Nigeria in 2023.

Omotosho said its members will drag the governor into the race, if he refuses to contest, saying Fayemi is eminently qualified to occupy the exalted position considering his intimidating political profile.

But strong indications have emerged that there was a sharp disagreement within the state chapter over Fayemi’s endorsement as some leaders under the aegis of Ekiti State Stakeholders Forum flayed the party’s leadership.

The Forum, in a statement on Monday signed by its Secretary, Prince Bamgboye Adegoroye, which denied endorsing the alleged Fayemi’s presidential ambition, noted that the purported endorsement does not reflect the general will of APC members.

It said the purported endorsement, which was credited to a statement by the APC state Chairman, Hon. Paul Omotoso, was a personal view of the Publicity Secretary Ade Ajayi who represented Omotoso at an event in Ekiti at the weekend.

The Forum added Ajayi only expressed a personal view on the matter and that his views neither represented the position of Omotoso nor that of Ekiti APC.

The statement reads: “The attention of the Ekiti State Stakeholders Forum has been drawn to a statement credited to Mr. Paul Omotoso on the idea that APC Ekiti State chapter has backed Dr. John Kayode Fayemi for the 2023 Presidency.

“We want to state unequivocally that Hon. Ade Ajayi who represented Mr. Omotoso barely expressed a personal view at a social event, where the convener was absent or at best, the views of a small clique in the party.

“The leaders of APC in Ekiti State are unaware of the idea. Again, we note that Hon. Ade Ajayi’s boss does not even believe that the position should be zoned to South West as expressed on the national platform recently.”

It stressed that all the 17 states in the southern part of the country deserved a shot at the Presidency if it is agreed upon by the national leadership of the party.

“Ekiti State Stakeholders Forum along with other eminent Yoruba leaders will canvass for the opportunity to produce the next President in 2023 from our zone.

“Adoption of an authentic, qualified, well known, humane and experienced Yoruba man is our goal, and we will play our part in accomplishing that task,” the Forum added.