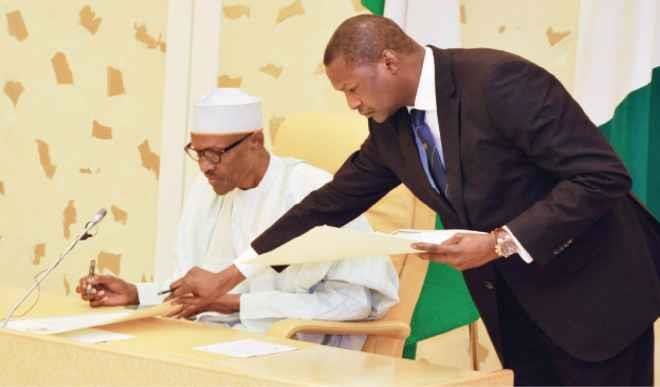 Attorney General of the Federation and Minister of Justice, Abubakar Malami, has written to President Muhammadu Buhari, debunking allegations of corruption.

Malami in the letter listed all his sources of income, which he declared in the assets declaration form filed with the Code of Conduct Bureau (CCB) in 2015 when he was appointed minister and reappointed last July.

He said he was already wealthy before being appointed minister, having engaged in enterprises such as hotels, farms, food production and processing, restaurants and legal services.

The letter followed allegations of corruption by a group, an action Malami described as campaign of calumny by his detractors to tarnish his hard-earned reputation.

The letter read: “I have taken a personal decision to seek remedy from the court as a result of the series of derogatory contents so published against me. In the same vein, I have written the Inspector General of Police to investigate the matter. I nonetheless, felt it is imperative to write Your Excellency on the subject above. This is because the crux of their campaign is to falsely portray me as a corrupt officer who used public office to acquire wealth and build an empire.

“On the contrary Your Excellency, since my appointment as minister in your cabinet, I have conducted myself strictly within the confines of the Code of Conduct for Public Officers contained in Part 1 of the Fifth Schedule of the 1999 Constitution of Nigeria, as amended.

“It is to be noted that apart from my successful legal practice of more than 20 years, seven of which were as a Senior Advocate of Nigeria (SAN) before my appointment, I have as allowed by law had intrests in business ventures, all of which I had resigned from active participation upon my appointment.

“Among other things, I owned lucrative business ventures of Rayhaan Hotels and Rayhaan Food & Drinks, both in Kano, since December 13, 2013, years before the 2015 election that saw to the victory of President Muhamadu Buhari and long before I was appointed minister in the first term. That informs why those items were included among 27 property listed in the Code of Conduct Bureau form filled by Malami when he was first appointed a minister.

“Apart from the above as income from the government, Your Excellency is invited to also note that while the Code of Conduct for Public Officers prohibits my active participation in the running of my already established ventures, it does not preclude me from gaining the fruit of my establishments. Hence, earnings from mainly the hotels, restaurants, farms are used to either improve these ventures or to expand and build new ones. In all these, the requirement of the law is that I declare at the point of exit from office as I have declared at the point of entry.

“On assumption of office in 2015, I had course as a constitutional requirement to file my assets declaration form at the point of assuming duty as a Minister of the Federal Republic of Nigeria detailing my assets which include: my houses (both residential and others) farmlands, hotel, school and other enterprises. Statements of accounts from all my banks were also submitted to the Code of Conduct which were duly verified as is the procedure after submission is made. A copy of the form is attached hereto as annexure1, should Your Excellency wish to personally review it.

“As a public officer, my sources of income were streamlined and narrowed to my entitlements from the government coffers. These entitlements come in the form of salaries, allowances and estacodes. For the period, I have served as a minister,for the 1st term, starting from November 11, 2015 to May 28, 2019, the cumulative figure of what constitutes these entitlements is as provided for in our laws relating to the salary and emoluments of political office holders.’’

“As Attorney General of the Federation and Minister of Justice, I pledge to continue to uphold the highest ideals in respecting the professionalism of the office and to continue to serve the government with the best intent in mind in order to enable President Buhari’s administration achieve all the development goals set out.”

He also attached the Code of Conduct Bureau forms he filled, the statement of accounts of all the businesses he owned regarding the turnover, covering the period of his appointment to date.