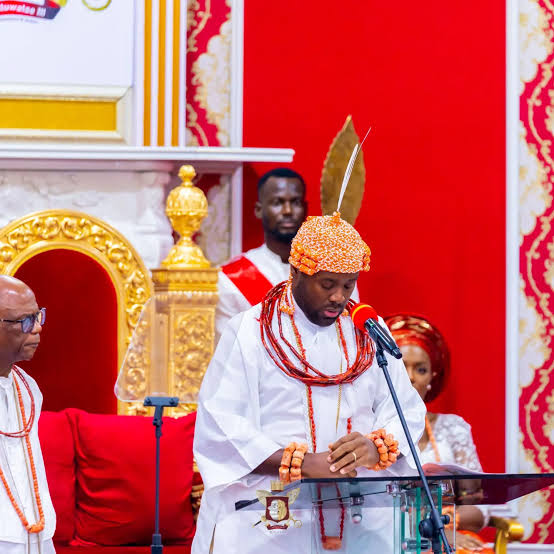 OCEAN MARINE SOLUTION LIMITED: His Majesty, Ogiame Atuwatse III The Olu of Warri, is Giving The Company a New Look Since He Took Over From The Late Captain Hosa Okubo

The reality of such a business is when it grows in capacity and strength, and also begins to impact people’s life positively. Hence, a successful business can ensure that it offers exceptional services.

When the late business tycoon, Captain Hosa Okunbo started the Ocean Marine Solution Ltd, he never saw the dream to be big as what it has achieved now. Although the idea came to him as a result of starting a company to foster a new approach in the marine and petroleum sector in Nigeria, he built the company, Ocean Marine Solution Ltd, (OMSL) as a strategic organization operating the marine industry to provide solutions tohigh-risks security personnel in Nigerian waters.

Adulterated Champagne Filled with Liquid Drug Discovered Being Sold on the Open Market… One Dead, Many Hospitalized

Ever since the deceased established the company, the company has made a lot of tremendous successes in achieving the vision and mission of the founder, by producing more vessels and human capacity to keep providing solutions. Late Captain Hosa Okunbo believed so dearly in his dream. He worked hard to give the company the strength it has today, by employing competent men and women who believed in putting their professionalism to the job. Businesses are nurtured when experts put their tenacity, grit, and commitment to work. It is this act of dedication that makes the OMSL become what it is today.

Just like the popular soft drink, Coca-Cola, when the company started, in its first year, it sold just an ordinary 12 bottles, but now the soft-drink company is one of the most widely sold drinks in the world. It is the power of consistency. It is this consistency that OMSL has experienced since the idea was birthed by the late businessman. The late Captain Hosa Okunbo was an industrialist, a doer, and a dream chaser because he was dedicated to his dream; especially to seeing all his businesses flourish.

Establishing a business doesn’t come easy; it comes with frustration, doubt, imposter syndrome, and fear. But when late Captain Hosa Okunbo was starting OMSL, he knew it would work, because he saw a problem and he proffered a solution. Any business that solves a problem stands to outlive the owner and do better than when the owner has gone. Truly, since the demise of the OMSL owner, the company has been successfully achieving a new paradigm in providing top-notch services to the marine sector.

In 2019, before the shocking death of Captain, His Majesty, Ogiame Atuwatse III the Olu of Warri then Prince (Omoba) Tsola Emiko was appointed as the acting chairman because of his entrepreneur prowess by the late founder, Captain Hosa Okunbo, and since the intelligent monarch took over the leadership of the company, he has enviably brought the company to giant strides that even the founder found His imperial majesty worthy to become Chairman of Ocean Marine Solution Ltd.

Having a business is fine but when the business doesn’t have good management or leadership, it makes the business struggle for survival. With the intelligent gusto of the eminent monarch, the OMSL has grown at an exponential rate, compared to when the founder was alive. His emergence as the chairman has given the company and new perspective and the member of staff are excited to have him as the new chairman because of his candour to humanity, and subtle and yet acerbic move to implement new policy within the company.

OMSL is one of the most reputed companies in Nigeria that deal with marine security. And ever since it was established, the company has been consistently improving security in the maritime industry, with the help of cutting-edge technology to make Nigerian lagoons and creeks secure for the exploration of crude oil. Thus, when the late Captain Hosa Okunbo was alive, he was sincerely committed to this idea because he strongly believed it.

He dreamt big and his doggedness gave him the courage that the business will keep serving its purpose. Indeed, it is serving a greater and more promising in the hands of the new chairman, His Majesty Ogiame Atuwatse III, Olu of Warri, who is using his vibrant mind and his youthful energy to drive the business forward.

However, businesses like Ocean Marine Solution Limited, OMSL survive when they have respected and hardworking chairman.

May OMSL continue to flourish under the leadership of our royal father, His Majesty, Ogiame Atuwatse III.

Share this post
Tweet
Related tags : Ocean Marine Solution Ltd: His Majesty Ogiame Atuwatse III The Olu of Warri is Giving The Company a New Look Since He Took Over From The Late Captain Hosa Okubo