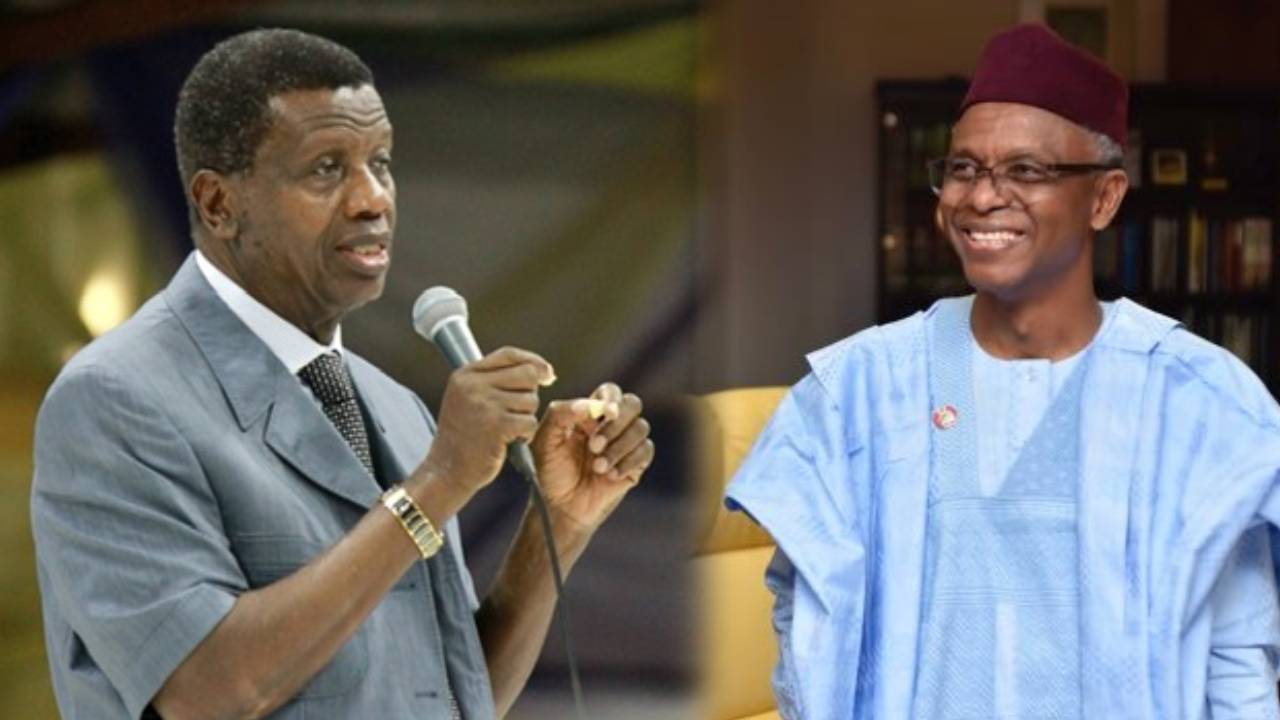 Four days after the Federal Government slammed indefinite ban on use of Twitter, prominent Nigerians have continued to flout the order.

Those who have dared the FG include Governors of Kaduna and Ondo states, Nasir El-Rufai and Rotimi Akeredolu respectively, former Ekiti governor, Ayo Fayose and senators Dino Melaye and Shehu Sani.

Government had on Friday imposed suspension on Twitter alleging persistent use of the platform for activities capable of undermining Nigeria’s corporate existence.

Following the announcement of the ban on activities of the microblogging platform by Information Minister, Lai Mohammed, Minister of Justice and AGF, Abubakar Malami have directed the Director of Public Prosecution of the Federation (DPPF) in his office to swing into action and commence the process of prosecution of violators of the Federal Government’s de-activation of operations of Twitter

Adeboye said tweeting is in accordance with Article 19 of the UN universal declaration of human rights.

“The Redeemed Christian Church of God is domiciled in more than 170 Nations & Territories. The tweets here are in accordance to Article 19 of the UN universal declaration of Human Rights,” the cleric tweeted.

Explaining why Deeper Life Church would remain active on Twitter, Kumuyi said his tweets were targetted at over 100 nations where the church has branches. He said the church made use of Twitter to share contents from any of the locations across the five continents.

“In view of the Twitter ban in Nigeria, please note that the content shared on this handle is targeted at a global audience in more than five continents and over 100 nations and we share the content from any of these locations,” he tweeted.

Mocking the FG last night, Shehu Sani tweeted: “You have to come to Twitter to know who is in Twitter and coming is a Taboo.”

Also defying the order, yesterday, Ayodele Fayose tweeted: “Anyone they arrest will only end up being celebrated. No one should be moved by empty threats of arrest. Certainly, what has a beginning must have an end. This dictatorial govt came and shall definitely go. No shaking!

“Good days ahead” while Melaye agreed with Pastor Adeboye that “United Nations Charter of which Nigeria is a signatory and have since domesticated.”

Earlier, El-Rufai and Akeredolu, both members of the ruling All Progressives Congress (APC), had tweeted through their verified accounts, daring Malami’s prosecution threats. At exactly 9:37 p.m. on Sunday, Kaduna governor shared an opinion article titled: “Based Nigeria: African country teaches US lesson in how to handle Big Tech tyranny”.

Governor Akeredolu also posted a statement reacting to the night attack that claimed several lives in Igangan community in Oyo State on Sunday.

Governor El-Rufai’s media aide, Muyiwa Adekeye said he had been outside the country for over a week, noting, “the activities of Twitter is not banned in the country.”

Spokesperson of Governor Akeredolu, Olabode Richard, also argued that the microblogging platform was accessible to Nigerians on Sunday, adding that his principal did not make use of the Virtual Private Network (VPN) or other alternatives being explored by Nigerians.

It, however, remains unclear if the order from the office of the AGF would be effected on, Adeboye, El-Rufai, Akeredolu and other “offenders”.

Speaking on a live television interview programme, yesterday, Governor Babajide Sanwo-Olu, said considering the economic implications of the decision, the Federal Government could have handled the situation better.

“Federal government can handle this a lot better. Because of the number of eCommerce, the number of youths doing digital stuff on the internet, and we cannot throw that away and say it’s not happening. I believe there could be a lot of restraint and better management from both sides,” the governor said.

“On both sides, there are issues that can be resolved between Twitter and the government and I think what they’ve done is not a ban but a suspension like they said, so in the period of suspension let us sit down.

“If we have 40 million users of that micro-blogger and another country has five million and they chose to take their investment to a country that have five million compared to a country with 40 million. It speaks to the reason we need to have that conversation with them. Probably if they have an office here things would have been done a lot quicker and better.”

Federal Government, yesterday, met envoys of the United States, the United Kingdom, the European Union, the Canadian Government and the Government of Ireland over their response to its ban on Twitter’s operations in the country.

The meeting which was at the instance of the Minister of Foreign Affairs, Geoffrey Onyeama, followed a statement jointly issued by the United States, the United Kingdom, the Delegation of the European Union to Nigeria and the Economic Community of West African States (ECOWAS), the Canadian Government, and the Republic of Ireland at the weekend, expressing disappointment over the ban on Twitter’s operations.

Prior to the joint statement, the United States Diplomatic Mission to Nigeria, had issued a separate statement where it said the ban on Twitter’s operations in the country was an infringement on the rights of Nigerians to freedom of expression.

Present at the meeting were the United States Ambassador to Nigeria, Mary Beth Leonard; the British Deputy High commissioner, Gill Atkinson; Canadian High Commissioner to Nigeria, Nicolas Simard; the Political Adviser on Maritime and Security, Politics, Press and Information Section, Delegation of European Union to Nigeria and ECOWAS, Thomas Kieler; and the Charge d’Affaires of the Embassy of Ireland, Mr Conor Finn.

Onyeama said the meeting was as a result of the statement jointly issued by the missions which was forwarded to him.

Onyeama further said he felt it was absolutely appropriate to take their comments very seriously and meet with the heads of missions due to the respect for their countries and in view of the relationship with the affected countries.

He also said the meeting was in their usual friendly way, to discuss and share opinions with respect to the Twitter ban and clarify certain things.

“So, it was for that reason that I have invited you here this morning, not summon, invited to discuss some of these issues,” Onyeama said.

Responding on behalf of other envoys, Leonard said as partners, they want to see Nigeria succeed, unified, peaceful and prosperous.

Asked if they were withdrawing their statement, Leonard said they recognised that there were issues of irresponsible use of social media, but “we remain firm in our position that free access to the ability to express oneself is actually very important, and perhaps, even more important in troubled times.”

The Federal Government has directed broadcast stations to de-install twitter handles and desist from using twitter as a source of information gathering for news and programmes presentation, especially phone-in programmes.

The directive was issued in Abuja by the National Broadcasting Commission (NBC) in a statement by its Acting Director-General, Professor Armstrong Idachaba.

NBC said it would be unpatriotic for any broadcaster to continue to patronise the suspended Twitter as a source of its information.

“Consequent on the suspension of Twitter operations in Nigeria by the Federal Government over the persistent use of the platform for activities that are capable of undermining the corporate existence of Nigeria, the National Broadcasting Commission directs all broadcasting stations in Nigeria to suspend the patronage of Twitter immediately.

“In compliance to the above directive, broadcasting stations are hereby advised to de-install twitter handles and desist from using twitter as a source of User Generated Content (UGC) of information gathering for news and programmes presentation, especially phone-in.

“Section 2(1) r of the NBC Act entrusts the commission with responsibility to ensure strict adherence to the national laws, rules and regulations. Also, section 3.11.2 of the Nigeria Broadcasting Code provides that ‘the broadcaster shall ensure that law enforcement is upheld at all times in a matter depicting that law and order are socially superior to or more desirable than Crime and Anarchy,” Idachaba said.

Idachaba further said attention was also drawn to Section 5.6.3 of the Broadcast Code which required broadcasters to be mindful of materials that may cause disaffection, incite to panic or rift in the society in the use of a UGC.

“Note that it will be unpatriotic for any broadcaster in Nigeria to continue to patronise the suspended Twitter as a source of its information therefore strict compliance is enjoined,” Idachaba said.

Socio-Economic Rights and Accountability Project (SERAP) has condemned the directive by the National Broadcasting Commission (NBC) to all broadcast stations in the country to suspend patronage of Twitter with immediate effect as “the patently unlawful and unconstitutional.”

NBC had reportedly stated that the decision followed the suspension of Twitter operations in Nigeria by the Federal Government over purported use of the platform for “activities that are capable of undermining the corporate existence of Nigeria.”

SERAP in a statement by its Deputy Director, Kolawole Oluwadare said the directive by the NBC is itself unlawful because it is based on another unlawful decision by the Federal Government to suspend Twitter in Nigeria.

“The NBC’s directive has political interference written all over it. It is a blow to Nigerians’ rights to freedom of expression, media freedom, media independence and diversity. The directive must be immediately withdrawn. Freedom of expression is a fundamental human right. This action by the NBC is yet another nail in the coffin for human rights, media freedom and independent journalism under this government.

“The Office of the UN High Commissioner for Human Rights should publicly and vigorously express concerns over the Nigerian government’s increasingly brutal crackdown on media freedom, and use all possible means to urge the government of President Muhammadu Buhari to protect and respect freedom of expression.”

An international humanitarian body, De Norsemen KClub International has kicked against the Nigerian government’s ban on Twitter, saying it was an ambush on the nation’s fledgling democracy.

The group said the Muhammadu Buhari-led administration was mocking democracy, adding that it was appalled that a government that came in through a democratic process, and prided itself as an upholder of democratic principles, could take such brazing unpopular decision without recourse to democratic principles and constitutionality.

In statement by it International President, Dr. Adeshola Giwa, on Monday, De Norsemen stated its belief and commitment to free speech, noting that only a government that had something to hide would abridge freedom of expression.

“De Norsemen Kclub International wish to remind the Federal Government that a government that has nothing to hide is not afraid of free speech. The rule should be: let the people express themselves and take responsibility of their expressions. We want to emphasize that freedom of speech is an inalienable constitutional right of citizens. Citizens’ right to free expression is non-negotiable and it is only a court of competent jurisdiction, and not the fiat of government, that can determine when the expression of citizens runs foul of the law.”