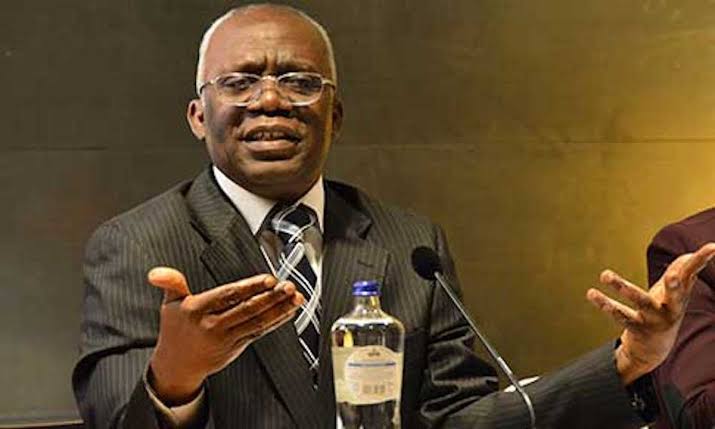 A senior lawyer and rights activist, Femi Falana, has alleged that one of the evidence presented against the suspended Economic and Financial Crimes Commission (EFCC) boss, Ibrahim Magu, is false.

He wrote the Justice Ayo Salami-led presidential panel investigating allegations of abuse of office and insubordination against Mr Magu while making a case for his client, Rachidatou Abdou.

It was gathered that two French nationals, Gnahouse Nazaire and Senoue Modeste, were remanded in prison custody in 2015.

The duo and a lawyer, Ferdinand Egede, were arraigned before the court by the EFCC over alleged forgery and altering of documents in 2007.

According to a Vanguard newspaper report, the defendants were accused of conspiring among themselves to forge the resolution of a company, Rana Prestige Industry Ltd, purported to have been signed by Mrs Abdou.

Also, on November 22, 2005, the defendants allegedly forged a Corporate Affairs Commission form CAC 17 and said that it was signed by the woman. The case is still subsisting, although the defendants have been granted bail.

Meanwhile, it was gathered that a petition recently emanated from the case which formed one of the the evidence in the probe of Mr Magu.

The anti-graft agency’s acting chairperson was forcefully arrested in July and driven to the Presidential Villa in Abuja, where he was held for more than four days.

Mr Buhari had approved the establishment of a Judicial Commission of Enquiry under the Tribunals of Inquiry Act (Cap T21, LFN, 2004), for the investigation of the activities of the EFCC from May 2015 to May 2020.

Mr Magu has, however, denied all the allegations of corruption and insubordination made against him.

‘False Evidence’
In the letter dated September 4, Mr Falana advised Mr Salami not to recommend the termination of the charge involving the two French nationals and the lawyer.

He said that Mrs Abdou who is the complainant in both criminal cases informed his firm that the defendants submitted a petition to the presidential panel claiming that Mr Magu abused his office by charging them with forgery and stealing in the Lagos State High Court.

“We have since confirmed that the Honourable Judicial Commission entertained the petition, reviewed the two criminal cases pending in the Lagos State High Court and took evidence from the 2nd defendant who has been dismissed from the company on grounds of fraud. The tainted evidence of the defendants was said to have been corroborated by his lawyer who alleged that the Economic and Financial Crimes Commission is currently prosecuting Mr. Ricky Tarfa SAN for defending the defendants in the criminal cases.”

Mr Falana alleged that the defendants had been boasting in Cotonou that both criminal cases pending against them in the Lagos State High Court would soon be terminated based on the assurance from the judicial commission.

“Embarrassed by the development, our client has instructed us to protest the decision of the Honourable Judicial Commission to deny her the opportunity to react to the contemptuous and misleading evidence of the defendants who have deliberately stalled their trial at the Lagos State High Court,” the letter read.

He said Mrs Abdou has already given evidence as the complainant in the pending criminal cases before the Lagos State High Court where the defendants are standing trial for forgery, altering of documents and stealing the sum of N630 million from her company.

Mr Falana said it would amount to a dangerous precedent if the administrative commissions of inquiry stopped the prosecution of the criminal suspects.

While giving the background of the case, the senior lawyer said it all started in 2007 when Mrs Abdou decided to incorporate her company called RANA HAIR PRESTIGE in Nigeria.

“Out of her own volition, our client made her friend, Mr. Gnahoue Sourou Nazaire, a co-director in the company. Thereafter, the two business partners became close and our client became pregnant shortly after they started dating. But while our client travelled to France to deliver her baby Mr. Nazaire diverted the fund of the company and forged vital documents in order to reduce her shares in the company. Upon her return to the country in May 2012, our client wrote a petition to the Special Fraud Unit of the Nigeria Police Force.”

In the said petition which was written by Akingbolu & Salawu, her counsel at the material time, Mr Falana said his client alleged fraud, forgery and stealing of the fund of her company by her partner, Mr. Nazaire and a former Managing Director of the company, Mr. Senou Modeste.

“The Police investigated the allegations and confirmed that they were true. Even though the defendants were indicted the Police declined to arraign them in court based on their plea to resolve the dispute with our client in an amicable manner. On the basis of the assurance of the defendants our client withdrew her petition from the police.”

The defendants, however, failed to resolve the dispute and threatened thereafter to deal ruthlessly with Mrs Abdou, Mr Falana stated.

“They boasted that they are ‘well connected in Nigeria’. It was at that stage that our client briefed us to take over her case. We accepted the brief on the condition that our office would collaborate with the law firm of Akingbolu & Salawu to secure justice for her. As soon as she accepted our terms we reviewed the case and petitioned the EFCC via our letter dated December 16, 2013.”

“Contrary to the spurious evidence of the defendants before the Honourable Judicial Commission, our client’s petition was submitted to the EFCC under the chairmanship of Ibrahim Lamorde,” Mr Falana wrote.

According to him, the EFCC painstakingly investigated the complaint before commencing prosecution in 2015.

“It was later established by the anti-corruption agency that the judgments were purchased by the applicants’ counsel and that there were regular telephone conversations between the counsel and the judge when the fundamental rights cases were pending at the Federal High Court.

“Hence, Mr. Ricky Tarfa SAN was charged with obstruction of justice contrary to section 97(3) of the Criminal Code Law of Lagos State. We have confirmed that the Honourable Judicial Commission has also taken evidence from the representative of Mr. Ricky Tarfa SAN with a view to making a recommendation to the President to direct the Attorney-General of the Federation to terminate the criminal case pending against him at the Lagos State High Court.”

Mr Falana further alleged that the defendants lied on oath with the aim of perverting the course of justice when they claimed that his client’s petition was submitted to the EFCC under the leadership of Mr Magu before the Judicial Commission.

He acknowledged several attempts to deport the complainant through the Nigeria Immigration Service and the police in a bid to frustrate the trial of the defendants.

“(They) have decided to subvert the Nigerian criminal legal system by praying the Judicial Commission to recommend to the President to direct the Attorney General of the Federation to terminate the criminal cases pending against them in the Lagos State High Court.”

Mr Falana then urged the judicial commission of Inquiry to refrain from further reviewing the criminal cases pending in the Lagos State High Court.