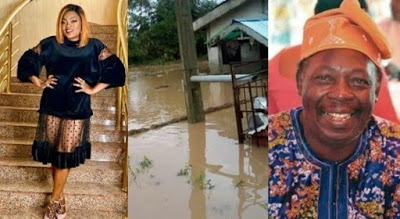 The actor had announced that his house located in Oke Isagun community of Oke Odo LGA, a suborb of Lagos was destroyed by flood after heavy rainfall.

Although, news making rounds suggests that Akindele-Bello gifted Pa James a new house, Apple's Bite Magazine reliably gathers from Broadway tv that it was a cash gifts the actress gave.

In a post that has now been brought down, another actress Kemi Akorede had taken to Instagram to announce that Funke Akindele-Bello had gifted Pa James a new house. She wrote,

“On behalf of PA JAMES, I Want to say Big thank you to @funkejenifaakindele for the new apartment given to him by you. God bless you so much for your good heart. your type is so rare..you are a gem. Almighty God will continue to make way for you where there seems to be no way.”

It was gathered that Funke Akindele-Bello had instructed the announcer to bring down the post. 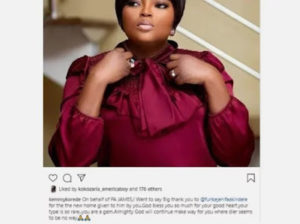 In another post, Kemi thanked those who came through for the actor, saying “To all that had supported pa James we say a big thank you