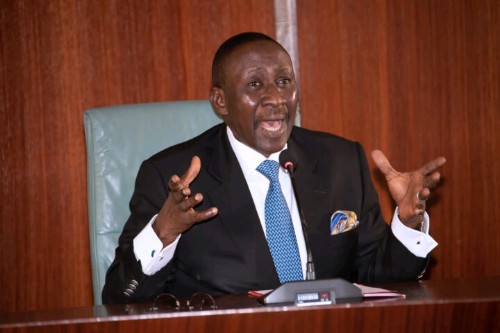 Monguno spoke on Thursday when he appeared before the house of representatives committee on national security and intelligence to defend his agency’s 2023 budget.

The NSA told the lawmakers that President Muhammadu Buhari desires to hand over a safer Nigeria to his successor.

“I must say that the type of insecurity that confronts us is not peculiar just to Nigeria, but it’s a global thing. And in today’s context, we can only overcome this problem when we recognise the importance of intelligence as being the driver against insecurity,” he said.

“It is important that all the problems I present are taken into consideration by this very important committee. We hinge all our hope and aspirations on whatever actions your [committee] will take in solving the myriads of problems that confront us, and I want to assure you that the problems are quite enormous.

“Please, honourable members, I want you to set aside whatever other competing considerations there are. President Muhammadu Buhari has the desire to hand over to whoever is going to inherit what he is working on right now — a safer Nigeria. It is true and I have to be very honest with you.

“I am also happy to inform you that at the recently concluded ministerial retreat which was organised by the office of the secretary to the government to the federation on behalf of the president — the senate president and the honourable speaker of the house of representatives were there — I highlighted briefly some of the problems confronting us and they have all agreed to help us solve them.

“I am appealing to your conscience. All of you represent different parts of this country and I know you have the interest of Nigeria at heart. Our people are suffering; they are weeping; they are wailing; they are moaning; they are gnashing their teeth. We must help them.

“We have our own limitations as intelligence agencies. The rest can only be done through the legislative drive.”

The NSA said the successes in the fight against insecurity have been possible because of the intelligence-driven activities of the agencies.

“The successes we have been recording so far in overcoming the security challenges, especially in the last four to five months, are basically rooted in the efforts of the Department of State Services (DSS), National Intelligence Agency, Defence Intelligence Agency, having been able to provide timely intelligence to the operational elements,” he said.

“I want to commend their effort, and I also want to, by extension, commend the effort of the operational sphere.

“Overcoming a symmetric problem is completely different from what we experienced in the last century. Everything revolves around intelligence. And the intelligence we are dealing with is a broad spectrum which goes all the way down to the local level.

“We deal with human beings, and if we are not supported in the right way, no matter how emotionally and psychologically we are prepared, we cannot overcome these problems without legislative support.”

In his remarks, Sha’aban Sharada, chairman of the committee, said lawmakers have appealed to the budget office to “consider the removal of the agencies in the intelligence community from the envelope budgeting system” to strengthen their operational capacity.

He said the intelligence agencies “put more efforts at ensuring a secure Nigeria especially before, during and after the forthcoming elections”.

Yusuf Bichi, director-general of the Department of State Service (DSS), was among the heads of intelligence agencies present at the budget defence.