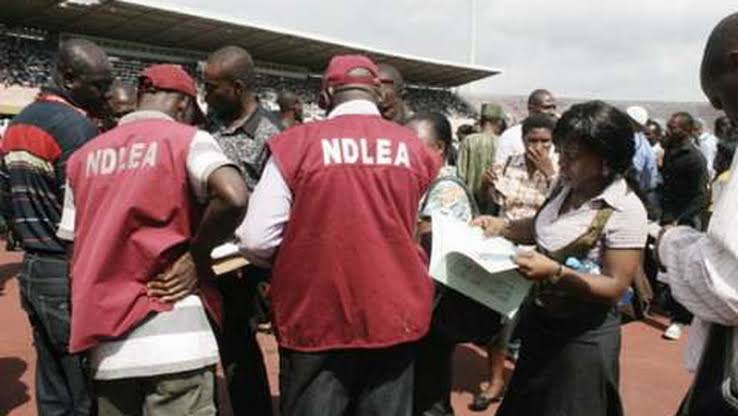 The National Drug Law Enforcement Agency (NDLEA) says it has arrested two businessmen, who had been on the run, for their alleged involvement in drug trafficking.

Femi Babafemi, NDLEA’s spokesman, said one of the suspects, Nebo Christopher, was wanted for his role in the importation of 40 cartons containing 346,800 pills of co-codamol.

He said co-codamol is a combination of paracetamol and codeine and was seized at the cargo wing of the Murtala Muhammed International Airport (MMIA) local wing in March 2022.

He added that Christopher was arrested on November 3.

Babafemi also said Omeje Oliver, an automobile parts dealer, who had been on the run since April, was arrested on October 31 in Enugu.

He said Oliver fled to Enugu after abandoning his business at Aspanda, Trade Fair Complex Lagos.

Oliver was wanted in connection with the seizure of 600 grams of heroin concealed inside the soles of ladies’ footwear going to Liberia on April 16.

In another development, operatives on patrol on Malumfashi-Zaria Road, in Katsina state, arrested Bukar Haruna, a blind Nigerien, and his Saka, his son, for drug trafficking.

Babafemi said the suspects were arrested while heading to the Niger Republic with 20.5kg of Indian hemp and 10 grams of Exol-5.

He said NDLEA also recovered no less than 2,685.5kg of Indian hemp in four different operations in Edo the last week.

He said 53 bags of Indian hemp weighing 742.5kgs were seized on November 2 at a camp in Esioriri, Owan east LGA of Edo where four suspects were arrested.

Another raid in the house of one Joy Subaru led to her arrest with 30.5kg of Indian hemp recovered.

In the same vein, NDLEA operatives stormed the Egbeta Forest in Ovia northeast LGA of Edo on November 3 and recovered 112 bags of Indian hemp and eight bags of seeds weighing 1,598.5kg.

“In the Mubi area of Adamawa, operatives intercepted a Toyota Corolla car transporting 9,600 pills of tramadol on Tuesday, November 1,” he said.

“A follow-up operation later led to the arrest of the owner of the consignment, Mamuda Ramadan.

“Another suspect, Alhassan Muhammed, was arrested on October 30 on the Abuja-Kaduna Expressway with 136,000 pills of tramadol concealed inside his car’s spare tire.”