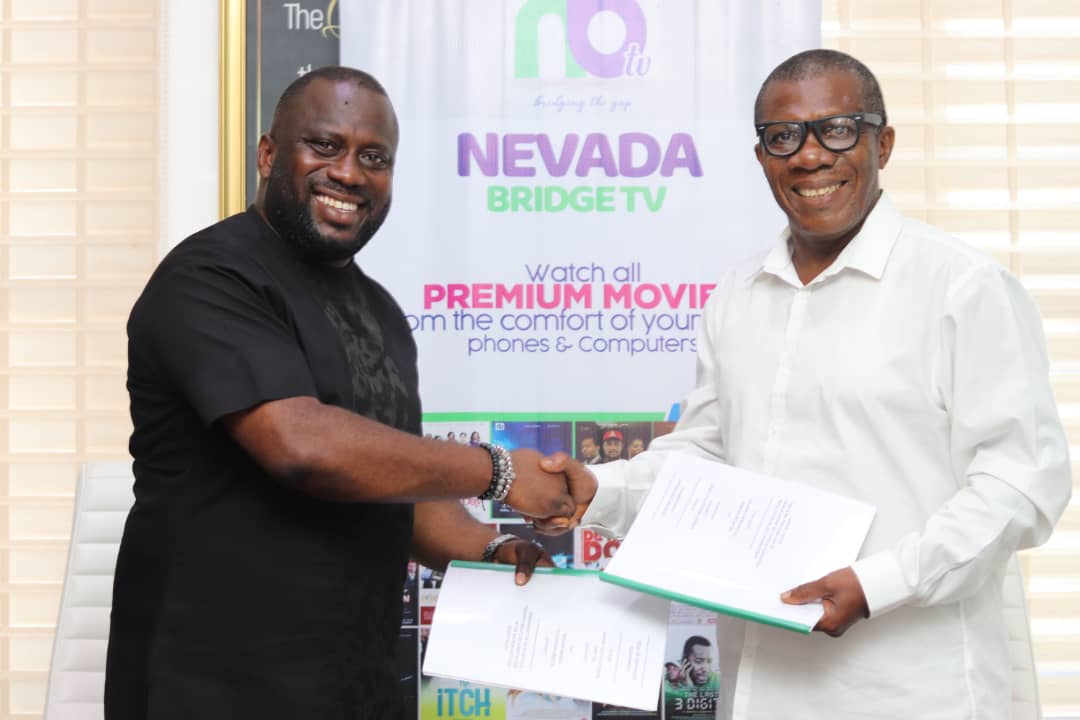 ‘Silent Night’, one of the all time biggest, most intriguing and highly influential stories ever told out of Nollywood is about to be remade by Nevada Bridge Productions in association with Grand Torch Pictures, Applesbite.com can confirm.

It would be recalled, that the original make of the 1995 hit thriller stamped Veteran Actor Segun Arinze as Nollywood’s Ultimate Onscreen Bad Boy, and earned him the moniker ‘Black Arrow’ for which he is still referred to till date, 25 years on.

CEO of Nevada Bridge TV, Neville Sajere executive producer of the new project with Producer and Director of the original movie Chico Ejiro who is also returning to wear same cap in the remake inked a formal contract to set agenda in motion on Friday, October 16, at the Lekki office of Nevada Bridge TV.

Present at the contract signing ceremony and media briefing were Veteran Filmmaker and one of the Ejiro scion in Nollywood Zeb, Segun Arinze who would double as Project Coordinator for the new project, Producer and Director, Obi Osotule and Patrick Uzoh, Chief Operating Officer of Nevada Bridge TV.

With story telling elements such as humor, intrigue and romance, the original make of ‘Silent Night’ delivered a well-executed tale of a privileged young man, Stanley, Ramsey’s character whom in search of excitement embraced the fast paced life to join a gang of armed robbers led by Black Arrow, Arinze’s Character, believing this would undo his perceived boring lifestyle.

His foray into the underworld of crime and cultism would make him do the unthinkable and get his fingers burnt.

For the remake, Chico Ejiro although still keeping details to his chest, has assured to bring in new twists and also make the plot more contemporary which would offer today’s film goers an opportunity to experience and enjoy a new interpretation of the classic.

“I feel excited about this collaboration to remake ‘Silent Night’, a great story and monster hit across Nigeria and Africa, shot 25 years ago.

“This time, we feel this new generation should see a remake of the story from a different perspective and angle,” Ejiro said.

Speaking further, he revealed that while principal photography for the new project is slated for the first week in December, three casts from the original make including Ramsey Noah, Segun Arinze and Kate Henshaw have been confirmed to return, while a crop of new silver screen faces would also feature in the remake.

Those in this category confirmed so far to join the cast line up are Comedian and Actor Bovi and Reality TV Star Erica of Big Brother Naija, Lockdown edition.


Speaking at the media parley, Neville Sajere expressed his excitement to be bankrolling this reboot. According to els like a part of history to champion this project.

“It makes me feel like a part of history, I feel like I am living my dream. I get that nostalgic feeling remembering when ‘Silent Night’ first aired 25 years ago, the name ‘Black Arrow’ was on the mouth of every Nigerian, he was a villain in every sense of the word, highly dreaded. The movie was one of the biggest movies of that era. I am very excited to be doing this.

Refuting claims that he was joining the remake trend, Sajere explained that he is not one to join trends or do things because others are doing it. In his words, “…this has always been my vision to remake some movies from yesteryears, and ‘Silent Night’ is one of those movies I planned to remake. The first movie I produced too is in the works for a remake.

The vision is to give this generation the opportunity to witness some characters from the past in contemporary form,” he submitted.

In the vein, Zeb Ejiro expressed his delight about the project in view, and said he is confident his brother Chico will create a brilliant remake of the original movie.

Underscoring the place of ‘Silent Night’ in the history of Nigeria’s motion picture industry, the ‘Sheik of Nollywood’ as he is referred to enlightened that the movie produced numerous stars who till date are still very relevant in the industry.

“…You know, Segun Arinze as a star that he is today, the movie at really launched him was ‘Silent Night’, and ofcourse helped someone like Ramsey Noah to also grow. Joke Silva too, ‘Silent Night’ gave her a landing in the movie industry. Before then, she was a television person.

“Silent Night was a monster hit. It was big. And I trust my brother Chico, the remake will be bigger and ofcourse better than the original. They are enlisting the best brains in this remake, and they will be using state-of-the-art equipment too.

“This remake will see a fine blend of old horn actors and new crop of stars too. 2021 will witness an avalanche of remakes with unique reimagining and story telling.

“I must also commend the executive producer for being such a visioner, not everyone would see what he has seen in this project.

“I personally will do all Within my sphere of reach to ensure that this remake becomes one of the biggest movies of 2021,” Ejiro submitted.