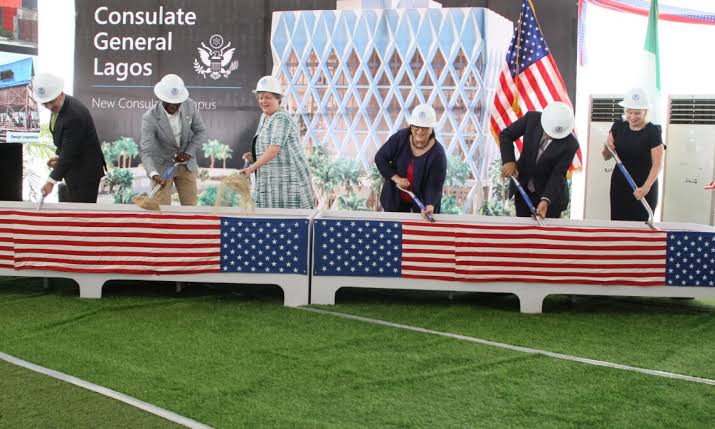 To further strengthen her diplomatic relationship with Nigeria, the United States government has announced her intention to build her world’s largest consulate in Lagos.

Speaking at the groundbreaking ceremony for the construction of the consulate in the Eko Atlantic City, U.S. ambassador to Nigeria Mary Beth Leonard said the project would be completed by 2027. 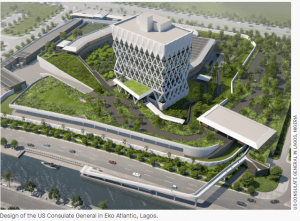 The U.S. to spend an estimated $537 million on the new consulate in Eko Atlantic, the four square miles of land in Lagos, Nigeria, reclaimed from the Atlantic Ocean, that features residential and commercial properties.

It is expected to be the largest US consulate in the world and gives the Eko Atlantic project, which started in 2008 and intended as an international financial center, an endorsement from a major government.

Apples Bite Magazine understands that it is designed by Ennead, a New York architecture firm, the consulate is expected to take up 50,000 square meters of space, and employ 2,500 Nigerian citizens in various roles from engineering and construction to administration.

In a press release, the US said about $95 million will be invested in the local economy as a result of the project.

The US already has a consulate office in Lagos, in addition to its embassy in Abuja, Nigeria’s capital.

But the scope of the new consulate campus “honors the vibrant relationship between the United States and Nigeria and communicates the spirit of American democracy, transparency and openness,” Mary Beth Leonard, the US ambassador to Nigeria, said.

This online platform noted that the US would have been encouraged by the fact that Eko Atlantic is already a home for some families and businesses, with other construction projects ongoing. The groundbreaking ceremony for the new consulate on March 31 was attended by past and present governors of Lagos state, and Ronald and Gilbert Chagoury, the Nigerian-Lebanese billionaire brothers whose companies have helped develop and fund Eko Atlantic.