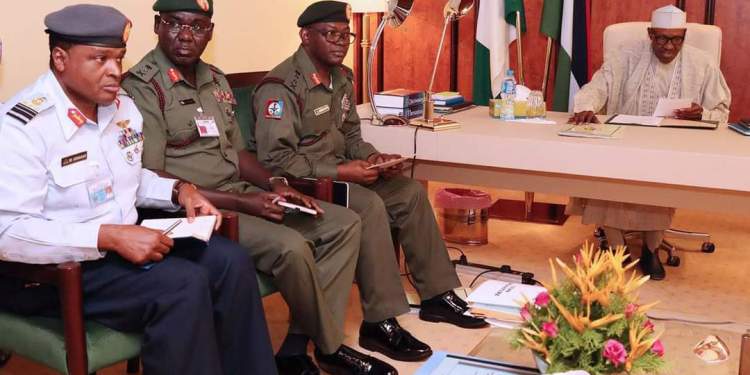 President Muhammadu Buhari’s government was forced to deploy the former service chiefs – General Gabriel Olonisakin (retd.), Lt Gen Tukur Buratai (retd.), and three others to neighbouring countries for a number of reasons, military sources familiar with the development have revealed to SaharaReporters.

“Some of the former service chiefs actually wanted choice postings to Pakistan, United Arab Emirates, and other countries with vast military and defence capabilities, but the Presidency had feelers that they would be rejected and this would cause a national embarrassment.

“There were petitions already from several quarters to the United Nations and most European, the Middle East and North American countries against the former chiefs, and there are fears that they would be rejected by the host governments. This is why they were sent to countries that are more or less indebted to Nigeria,” one of the sources stated.

“On the flip side, some of the former service chiefs don’t want to leave the country; they want to continue to monitor the military and the assets they have acquired in the country. So, they are contended to be backyard ambassadors.”

The President subsequently announced the nomination of the immediate past service chiefs on February 4 as non-career ambassadors, a decision which was greeted with widespread condemnation.

The decision was condemned by most Nigerians who believed that the former service chiefs should be probed particularly on the controversial $1 billion arms fund released between 2018 and 2019.

Nigerians also said Buratai and his colleagues must appear before the International Criminal Court, The Hague, Netherlands, to answer for several massacres in the country under their watch with the most recent being October 2020 Lekki shooting, where a disputable number of civilian protesters were killed and injured.

They also noted that the former Chief of Army Staff and possibly others must be probed for what has become known as the Zaria massacre, which was carried out by the Nigerian Army in Zaria, Kaduna State, on December 12, 2015, against Shia Muslims, mostly members of the Islamic Movement in Nigeria.

At least 348 civilians were reportedly killed, with 347 bodies allegedly secretly buried by the army in a mass grave.

The Minister of Foreign Affairs, Geoffrey Onyeama had earlier in a statement on Tuesday announced the postings of the former service chiefs.