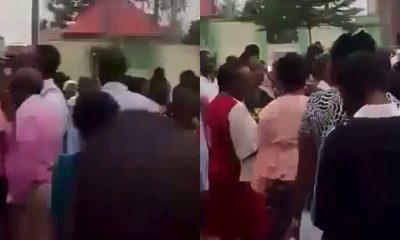 Medical workers of the Ekiti State University Teaching Hospital (EKSUTH), Ado Ekiti locked up the health institution while protesting over alleged unpaid emoluments by the management.
The staff, under the auspices of the Joint Health Sector Union (JOHESU), had massed at the main gate of the tertiary health facility located at the Adebayo area and sealed off the hospital.

For over four hours, spanning 8.00 am and 12 noon, no worker, including members of the management and doctors, were given free entry and exit throughout the time the warning protest lasted.

The protesting medical staff in their hundreds chanted antigovernmental songs to deride the government’s action over the debilitating plights of workers in the health institution.

Farotimi regretted that cooperative deduction had not been paid by the management in the last 24 months, thereby increasing the tally to an aggregate of N1.6 billion without hope that the amount would be defrayed in record time.

“When this government came in 2018, the aggregate of the outstanding deductions was a sum of N500 million. But now, it has swelled to as much as N1.6 billion.

Court Slams Sterling Bank, One Other With N841 Million In Damages For Unlawful Sealing

“Another issue that has been agitating our minds is the issue of Minimum Wage. It has been implemented for workers at the Federal Teaching Hospital, Ido Ekiti. Even in Ekiti State, all health workers are being paid, except our members.

“In the last meeting held by the hospital’s board, it approved the payment of minimum wage for us, yet nothing was done up to now. We can no longer wait and begin to suffer in silence. We must cry to government.

“The board will have another meeting next week, so what we are doing is just a warning protest. This gate is where we are going to be doing our work for the next few days and we will continue until we have a positive response”.

Responding to the degenerating situation, the EKSUTH’s Chief Medical Director, Prof. Kayode Olabanji, said the management met with JOHESU last week Thursday and reassured them of their commitment to accede to their requests.

Olabanji added that a letter of assurance dated August 19, 2022, had been given to JOHESU leadership, thereby reinforcing the management’s commitment to ensuring that all the backlog of emoluments will be paid.

“There is nothing we do in secrecy in this hospital. It is agreed that there was an approved minimum wage for workers.

But the questions are; was it cash-backed? Or was there money meant for payment that we stashed in one account? We really sympathise with them, but I think we have given them enough assurance that we will pay. We are still going to do another meeting this week to iron all these issues out,” he said.