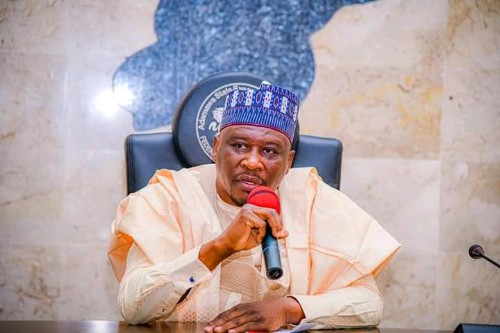 The executive Governor of Adamawa State, Ahmadu Fintiri, says the new cash withdrawal limit policy of the Central Bank of Nigeria (CBN) is targeted at the political class.

On Tuesday, Godwin Emefiele, governor of the apex bank placed limits on weekly cash withdrawals by individuals and corporate entities.

According to CBN, the new policy, which will take effect on January 9, 2023, is aimed at reducing the amount of physical cash circulating in the economy and encouraging more electronic-based transactions.

However, speaking at a campaign outing in Kala’a, Hong local government area of the state on Friday, Fintiri said it was evident that the policy by Emefiele was targeted at the political class.

The governor also said having lost out in his bid to join the political class, Emefiele chose to hunt politicians.

“What is breeding poverty? Economic policies. Look at the one that is about to be implemented by the Central Bank which would further throw the country into poverty,” he said.

“Nobody is saying the economy shouldn’t be cashless. Take time and do it systematically. We shouldn’t do it as if some people wanted to be politicians and they were denied the opportunity, then they use their office to punish the politicians.

Fintiri also reacted to comments by President Muhammadu Buhari that governors prevent development in the country by tinkering with local government allocations.

According to him, the federal government is the worst culprit in the illegal deductions of monies belonging to local governments and states.