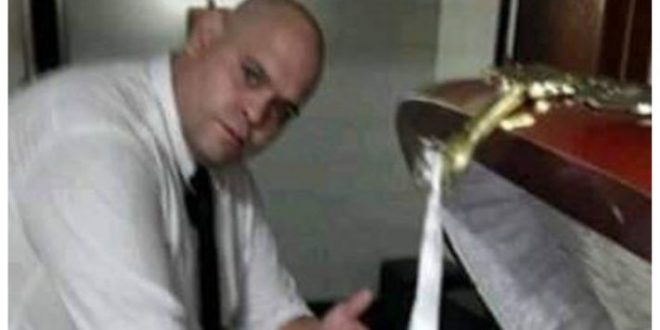 A funeral worker who was fired for taking of photo of Maradona’s corpse has been pictured taking the body to lie in state hours before he provoked the wrath of Argentina.

Diego Molina has received death threats for desecrating the sporting great’s body after he posed for a photo with one hand resting on Maradona’s head and the other giving a thumbs up.

Molina was one of the men tasked with preparing Maradona’s body ahead of the private open-coffin wake for family and friends on Thursday. Maradona died of a heart attack aged 60 on Wednesday.

A new photograph has emerged of Molina standing up in a van leaving the morgue in Buenos Aires following an autopsy ahead of Maradona’s body being transported to his state funeral.

After a private open-coffin wake, the casket was closed for the public send-off at the presidential palace as scores of fans lined up to pay their respects.
Scuffles broke out as fans jostled to see the coffin – which was covered in an Argentinian flag and Maradona’s signature number 10 shirt after it arrived in an ambulance early this morning.

Since his picture was shared to social media, funeral worker Molina has been sent death threats from furious fans. Some have called for him to be stripped of his Argentinian citizenship.

Owners of the funeral parlour Sepelios Pinier confirmed to local media that the worker has lost his job.

One Maradona fan who saw the picture wrote: ‘I want this fat baldie who took a picture of himself by Diego’s body dead. I want him dead. DEAD.’

Share this post
Related tags : Funeral worker that took a selfie with Maradona’s corpse lying in open coffin has been sacked