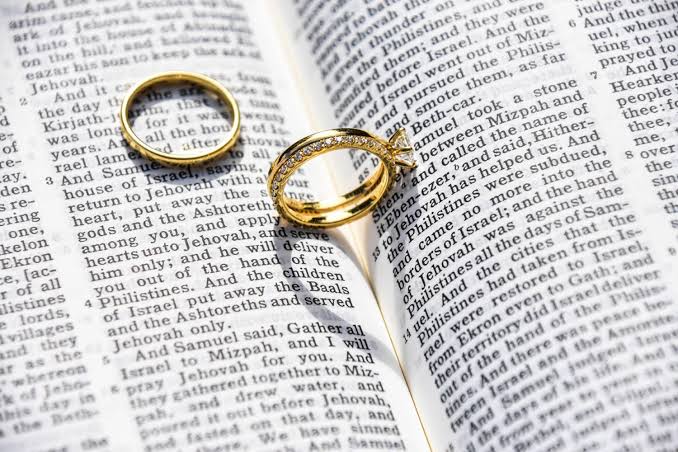 It is NOT biblical that a woman after (wedding)marriage MUST take the man’s name or surname. It has nothing to do with the bible and it is NOT what portrays the Christian teaching of “two becoming one flesh.”

In the on going discussion concerning Native Names versus English Names, many agreed that our identity or names are very important, and that no one should be forced to take an identity he or she cannot relate to.

To suggest that it is a MUST for a woman to take the husband’s name after marriage is the same thing as saying the woman has no identity outside of the man.

You are not happy that a catechist or a priest is imposing a name on your child during baptism but you don’t see anything wrong with the fact that you are imposing your name on your wife after marriage. Heloooooo!!!

Even biblically, this sort of thing never existed. People were simply identified by what they do or where they live or the children they have or simply as wife or husband of so and so person. They never changed their names.

If you trace your African culture back to your great grandfather’s era, you may still see the same pattern as the Bible.

So, where did we get the teaching of women taking the husband’s name as a MUST? Maybe from the obsolete law of Converture developed around the late Middle Ages. Or maybe from what some may call our culture that tends to see women as not having any identity outside of the man.

I know of a woman whom after marriage changed her name. About five years into the marriage, the man became sick and died. She remarried and she had to change her name again.

So, I was imagining the story of the Samaritan woman with Jesus in John 4 who married about six times. Or the story told by the Sadducees in Matthew 22 where a woman had to marry for seven times because the men kept dying without a son.

It then means, following our present custom, she will keep changing her name after the marriage of a new husband. It is like saying “you are nobody until you get a husband.”
This post would have ended here, but I think I need to make this clarification before I get misunderstood.

First, it is a different thing if a woman WILLINGLY wants to take the husband’s name. Just like how there should be nothing stopping a man from taking his wives to name as well. What I am against is the normalization of this practice and making it a MUST. If your wife does not want to change her name to yours, it should never be seen as an act of stubbornness or not doing the right thing.

Again, THIS IS NOT ABOUT FEMINISM. Please avoid the temptation of thinking Fr Kelvin is speaking for feminists.

Some of the things feminists advocate for are true and I agree, but they are true not because feminists say them, rather feminists say them because they are true. There is a big difference between the two. Truth existed before feminism and not the other way round. It is that truth I stand for and not the branch of that truth.
Well, as I will always maintain, you can argue with me, but make sure you come with facts.

Related tags : It's Not Biblical For A Woman To Take Her Husband's Name Or Surname After Wedding — Catholic Priest