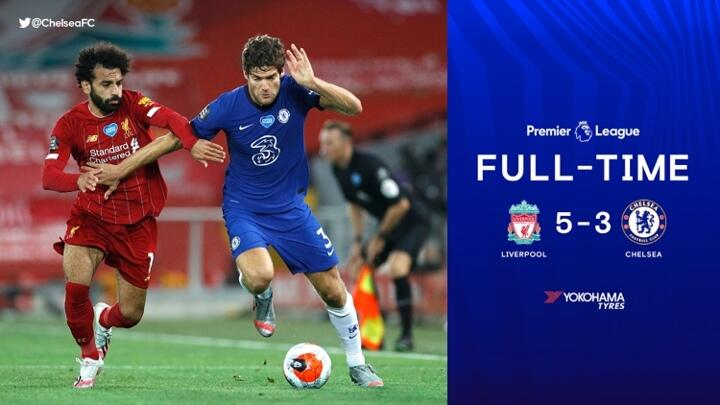 Liverpool and Chelsea played out a thrilling and goal-filled game with the game ending 5-3 in favour of the hosts and newly crowned Premier league champions.

Jurgen Klopp’s side came into the game having only won just three of their seven outings since the restart, including a 2-1 defeat to Arsenal last time out, but wrapped up the title in record time and knew whatever transpired in the game they would be lifting the Premier league trophy at the end of the night.

As it happened though, they didn’t let the inevitable celebration spoil their mood, instead they let it spur them as they bombarded the Chelsea defense with impressive midfield play from frequently criticized Naby Keita, one of those plays leading to a scorching goal from the Guinean.

Stealing the ball from Chelsea’s Willian and without hesitation letting it fly and putting the Champions on the way. Liverpool didn’t let up though as homegrown fullback and infamous set piece specialist Trent Alexander Arnold registered another free kick beauty to be added to his growing gallery making the scores 2-0 in favour of the hosts.

Gino Wignaldum quickly made the scores 3-0 by slotting in through a loose ball from a corner kick effectively taking the game from the visiting Londoners.

Chelsea’s French international striker Olivier Giroud tapped in one back at the stroke of halftime for his side though to make the scores 3-1.

The urgency and entertainment wasn’t lost as the second half kicked off, on the contrary it continued in the same vein as Liverpool increased their lead, this time through striker Roberto Firmino converting a header from an inviting Trent Alexander Arnold’s cross taking the scoreline to 4-1 in favour of the hosts and champions.

Chelsea pulled one back again through a mazy run from substitute Christian Pulisic who played a perfectly weighted pass to another substitute Tammy Abraham which was easily converted taking the scores of the entertaining encounter to 4-2.

Chelsea turned the game on its head one more time as a clearly inspired Pulisic drew one back for Chelsea by combining well with another substitute Hudson Odoi taking the scores to 4-3.

Liverpool were not to be denied though as they put the final nail in the coffin of the game through a textbook counter attack by left back Andy Robertson teeing up substitute Alex Oxlade Chamberlain for a tap-in, effectively ending the game as a contest and kickstarting the party for the title-winning Merseysiders.

Police Inspector Gets into Trouble for Threatening Civilian with Service Pistol