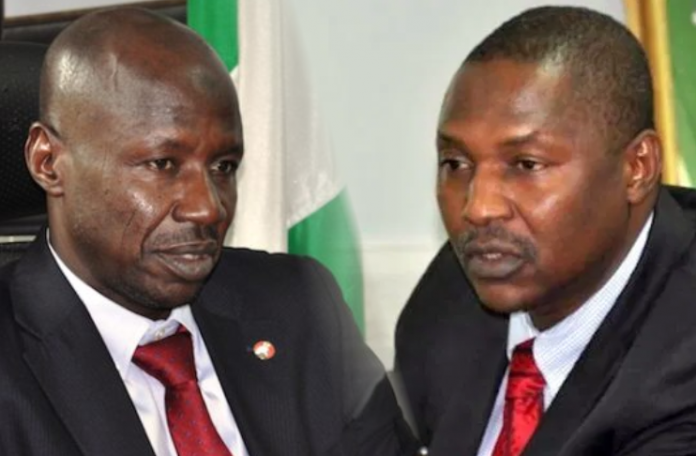 The suspended acting chairman of the Economic and Financial Crimes Commission has refuted corruption allegations against him by the Attorney-General of the Federation and Minister of Justice, Abubakar Malami, before the Presidential Investigation Panel in Abuja.

In a 26-page statement of defense, Magu challenged Malami to produce evidence of the allegations against him, insisting that the the petition “are totally false, untrue and merely targeted at destroying my hard-earned reputation as an incorruptible officer.”

Magu said the existing structure in the EFCC on the recovery of assets and the management of same would not allow any form of mismanagement of recovered asset.

He said under his watch, recovered funds were transferred via bank drafts in favour of the commission and lodged in the recovery accounts domiciled with the Central Bank of Nigeria.

On the allegation that he underreported N39.3bn recovered funds, he said the funds were not under his control having been lodged into the recovery account of the CBN.

On the allegations of allowing recovered properties, vessels and cars to waste away, Magu said he ensured that the federal government took the economic benefit of the assets.

Lawyers like Mike Ozekhome and Godwin Obla had testified before the panel, accusing Magu of breach of rule of law in the investigation and prosecution of corruption suspects.

Ozekhome had testified on Tuesday that he had approached Magu in June 2016 to grant administrative bail to his client, Abdulhamid Zari.

Also, Obla had told the panel that Magu ordered his arrest after he demanded payment of legal fees in the sum of N700m from the EFCC.

“What is happening is that the looters of our treasury have come together to fight Magu. All the allegations are things they are saying are in the newspapers, and have no evidence,” he said.

However, a senior lawyer with Magu, Wahab Shittu, said that the defence sighted in public had not yet been officially submitted to the panel.
Next Read: Olumide Akpata Emerges 30th NBA President