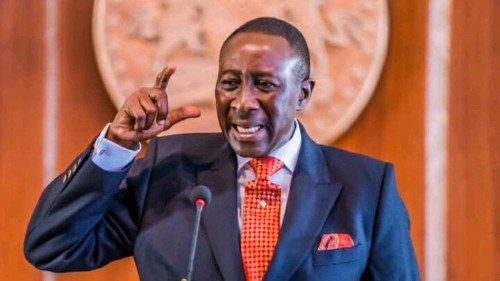 Babagana Monguno, national security adviser, says security operatives will clamp down on politicians who hire thugs to cause violence during election campaign rallies.

Speaking further, the NSA said politicians guilty of obstructing campaign activities of their opponents are suffering from “complex.”

“One thing I can assure you is, the president has given clear directives. The people’s will must prevail. What happened in Anambra or Osun and Ekiti is what we want to happen all over the country,” he said.

“Let the people choose their leader, whoever they want, then later, they can decide. But in the process of electing who governs them, we must be mindful of the fact that there are people who are hell-bent on forcing on bullying and cornering their opponents.

“It’s not even a function of numbers or a function of money. It’s a big problem. It’s a problem that’s also linked with complex. Because if you are really who you are, you don’t need to hire thugs.

“If you cannot restrain your thugs, the government will do that for you. And you will be called on the carpet and you will answer questions. We have a lot of politicians, and I’m not being specific about any politician or party. This virus has to be contained.

“I have given a clear warning that any politician who engages in any unpalatable activity — the use of thugs, and I know we have a lot of political thugs, straining at the leash, foaming at the mouth, desperate to bite and taste blood — we’re going to apply everything within the powers of the government.

“And I’m not saying that we’re going to just operate in a manner that is not regulated. The government is not going to embark on anything that is uncontrolled. We will operate on the straight and narrow, confining ourselves to legality. That I can assure you.

“The president has given his directives. And we’re working on that. So, those elements who think they can deny other people the political air to breathe and reach out to the local community, should have a rethink.

“I’ve said it before, and I’m saying it again. These political elements should call their thugs, their capo regimes, to order. They should have a nice, quiet fireside chat with them, and advise them that when the law enforcement agencies come, there’ll be no hiding place.”

When asked if insecurity may affect the dates of the elections, he said efforts are ongoing to ensure that the 2023 elections are peaceful.

“I hope your question is not a trap but the elections will take place; we have said that. By the grace of Almighty, they will take place in an atmosphere bereft of intimidation and violence. We’ll try as much as possible to maintain that,” he said.

South Africa President, Ramaphosa Risks Impeachment Amid Probe Over ‘$580,000 Stolen From His Farm’

“For those people who’ve been going around burning offices, killing people, I have already said it. The security agencies have been given that instruction — ‘visit them with all you have and let them understand that there are consequences for bad behaviour’.

“Everybody is a Nigerian; everybody is free to do whatever he wants to do, but don’t cross the line and move into another person’s territory.

“That you want to destroy government property, property set up by taxpayers’ money? How dare you? Who the hell are you? In a normal society, this is not tolerated, and I believe we’re a normal society.”

Monguno’s comments come hours after Usman Baba, inspector-general of police (IGP), said no governor would be allowed to prevent opposition political parties from holding rallies in their states.

“Some try to manipulate the campaigns,” Baba, who spoke through Dandaura Mustapha, deputy inspector-general of police, operations, had said.

“Some even sponsor thugs to pursue the opposition, remove their billboards, remove their posters and destroy their offices. We are aware and we have full reports.

“Based on this, the IG has categorically directed all commissioners of police that on no account should any serving or sitting governor stop other political parties from conducting their campaigns in the nooks and crannies of their states.”