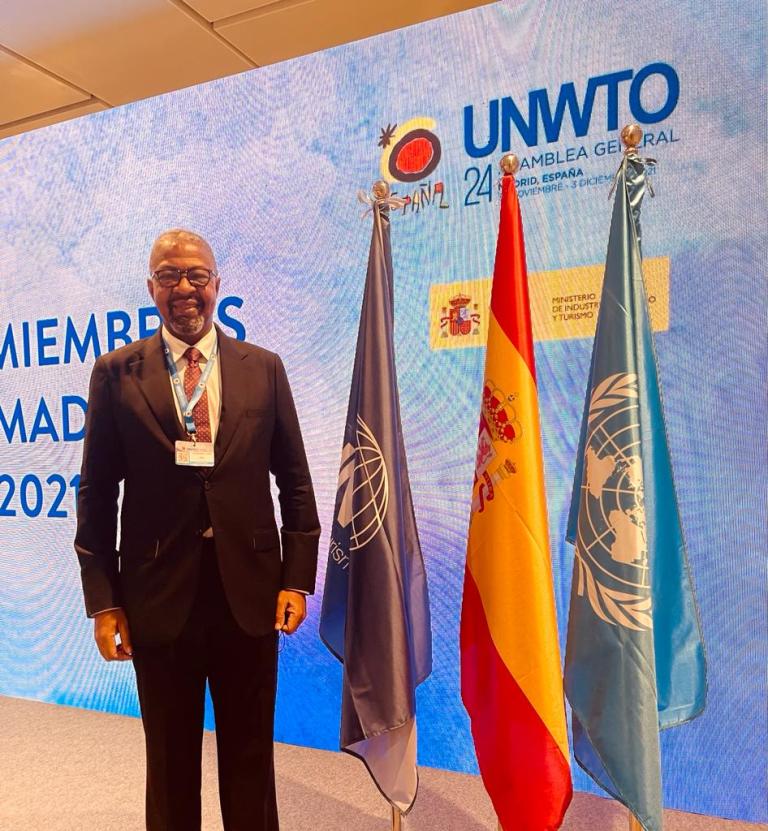 The Director General of the Nigerian Tourism Development Corporation (NTDC), Mr. Folorunsho Coker was a participant at the just concluded General Assembly of the United Nations World Tourism Organization (UNWTO) where the Corporation was readmitted as an affiliate member of the organization.

The UNWTO General Assembly took place in Madrid, Spain from November 30 to December 3, 2021.

Recall that NTDC was removed from affiliate membership of the organization over non-payment of membership dues by previous Director’s General of the Corporation.

It was however, gathered that NTDC, under the leadership of Mr. Coker, has since paid up seven years arrears of it’s membership dues and was invited to observe the last General Assembly, where they were accepted back into the fold.

NTDC participated in all the activities of the 24th General Assembly of UNWTO, especially in the 43rd Affiliate Members Plenary Session, which took place at the Madrid Marriott Auditorium Hotel and Convention Center in Spain.

The candidature of NTDC to become an affiliate member of the UNWTO was submitted for the consideration of the General Assembly and was officially approved during the GA session on December 1, 2021.

It was reliably gathered that the readmittance of Nigerian into UNWTO would further boost the development of the tourism potentials of the country and pave way for more foreign investments in the country, which is a major focus of the President Muhammadu Buhari-led Federal Government.

Mr. Coker was said to be pleased to be a participant at the UNWTO General Assembly and it was gathered that he used the opportunity to further call for support for Nigeria as a leading tourism destination in Africa.

The World Tourism Organization, founded on November 1, 1975 is the United Nation’s specialized agency entrusted with the promotion of responsible, sustainable and universally accessible tourism. Its headquarters are in Madrid, Spain.

The mission of the World Tourism Organization (UNWTO) is to advance sustainable tourism development that respects and preserves the world’s natural heritage.

The General Assembly is the supreme organ of UNWTO. It meets every two years to approve the budget and programme of work and to debate topics of vital importance to the tourism sector.

Every four years, it elects a Secretary-General. Its ordinary sessions are held every two years and is attended by delegates from UNWTO with Full and Associate Membership, as well as representatives from UNWTO Affiliate Members.

It is considered the most important global meeting of senior tourism officials and high-level representatives of the private sector.

Next Read: Dr. Godspower Oshodin Honoured by Apples Bite Award for his Contribution to Arts and Literature