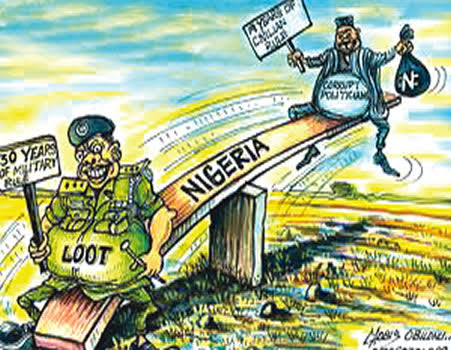 It took one novel, lethal and incorrigible virus to bring the world to its knees, unbalance the status quo and cause a paradigm shift in all strata of the society.

Every nook and cranny of the world experienced to a particular degree, and in their peculiar way, a taste of the pandemic – COVID-19.

Economies of countries have been brutally ravaged with recession. Booming businesses have witnessed dwindling fortunes. Many who once had jobs have found themselves jobless. Several students have had their academic odyssey halted due to the lockdown.

The list is inexhaustive indeed. While the world yet strives and drudges towards a panacea that would cure the virus, there remains a pandemic that it still has more power and control over – corruption.

Like the COVID-19, the pandemic that is corruption varies in prevalence and effect from country to country. Whether it is as little as turning a blind eye to a traffic infraction or as major as greasing palms with a wad of cash in order to subvert justice, corruption is a vicious reality that has its root planted in every nation of the world. While some countries have it in a minimal measure, Nigeria seems to have it in spades.

Corruption is no longer that disease that is situated in the crooked corridors of power.

It is now knee-deep in the lower echelon of the society, among those who were once considered ‘saints’ and critics of the ‘sinners.’ Perhaps no institution is this hydra-headed monster – corruption – more prevalent than the security forces of the country.

It could really boggle the mind to see those who are entrusted with the task of safeguarding the citizens and their rights, shapeshift into malevolent creatures, preying on the already downtrodden masses for their pecuniary goal.

Their roguish activities have grown in leaps and bounds. Drivers commuting within a state or those traversing to other states have to endure the nightmarish experience of being cruelly extorted by our security agencies, oftentimes for no valid reason.

Criminals are let go without so much as a slap on the wrist so long as they can grease their palms. While the inglorious list of their actions is endless, there is one that has become an embarrassing norm and a deeply upsetting act. The habit of police officers harassing pedestrians or passengers for their laptop’s receipt is a habit that needs to be expressly addressed and severely tackled.

One of the most remarkable products of the human mind is the invention of various forms of technologies. Our lives have been made easy, and our tasks made facile as a result of these inventions. Gone are the days when people have to sit down behind a desktop in order to send correspondence, do your day job, fill out a registration form, interact with anyone from anywhere, etc.

With devices such as a laptop, you can perform an electronically-required task without being stationed to a spot. Anywhere you go, it can always tag along with you in your briefcase or your bag.

Unlike in other countries, there is often an air of dread that accompanies you when lugging your laptop around in Nigeria. Over the years, the police have come to see anyone carrying a laptop as an Automated Teller Machine (ATM) that they can obtain money from. Their modus operandi is simple: produce the receipt of your laptop, or they confiscate it. There is a second option, however: offer a bribe and you are allowed to keep your laptop.

I endured one such experience when I recently travelled through the lands of Imo State on my way to my destination. What I witnessed and the ordeal I underwent was particularly disturbing, pointlessly timewasting, and extremely harrowing.

An Imo State police unit called Operation Search and Flush (SAF) stopped our vehicle along with other vehicles which fell into their trap of torment. By their jurisdictional specification, they are meant to reduce criminal activities and search for illegal items.

Unfortunately, their activities suggest otherwise. In reality, their search operation appears to be a facade to their real motive of extorting passengers. As with certain items, they request for the receipt of your laptop and proceed to take it into their possession when you refuse to offer them a bribe.

That was the initial outcome I experienced when I refused dancing to their depraved tune. After being detained for over an hour and desperate to resume my journey of twelve hours, I was compelled to part with some cash in order to retrieve my laptop. Pay anything less than what they demand, and you would find yourself stuck with them.

Pay what they demand, and you would be set free from their gory grip.
Judging from the spate of this habit nationwide, some questions that come to mind are: precisely where did this culture of harassment originate from? What exactly is so special about laptops that the police choose to accord attention to than other gadgets? One answer that readily infiltrates the mind is the reputation of Nigerians in relation to cybercrime.

Back in time when ‘yahoo-yahoo’ – as the crime is popularly called – was a national sensation, a laptop was the gadget commonly associated with those who perpetrate the crime. As a result, the police often treat those who carry a laptop around with the suspicious impression that could be a cyber-criminal.

Laudable as their efforts have been in curbing cybercrime, it appears a good number of them still operate in the guise of apprehending perpetrators to victimise people. Gone are the days when young males were their target suspects. Now, anyone, regardless of age, gender or status, can fall victim to their villainous deeds.

The only language they understand if they find a laptop in your possession is a bribe. It does not matter if you show them your documents on your personal computer (PC) to prove your ownership of the laptop; it does not matter if you back it up with an ID card; it does not even matter at times if you show them the receipt of the laptop; so long as you refuse to settle them with a bribe, you would agonisingly bear the brunt of their abuse of power.

If indeed they really want to determine the owner of a laptop, they would have explored the aforesaid measures. If their motive to apprehend cyber-criminals or retrieve stolen gadgets was indeed right, they would never be swayed with a bribe. It is apparent that their aim is not to uphold the law but to extort people.

In no courtroom of commonsense is what they do rational. In what sane country would the police force demand and expect people to carry around the receipt of a laptop they bought, much more one they purchased several years ago? There is absolutely no excuse they can offer that would justify their heinous acts. Granted, there are some miscreants that are doing grave damage to the country’s reputation with their criminal activities.

Granted, the various security forces are grossly underpaid. Yet, these are not sufficient reasons to put Nigerians through daymare. No one should ever have to endure this cruel, corrupt and conscienceless impropriety by the police force.

If we want a better country, then we need to find better ways of doing things across the board. In a time when forward-thinking countries are deliberating on modern inventions that will transmogrify our world, we need to flow with the tide rather than keep wedging ourselves in a clog of mediocrity and frustrating those that have genuine intentions of creating positives impact through their gadget.

We need to deterge ourselves from the mire of corruption that has kept us from attaining excellence and gaining prominence the world over. We all desire a better country; yet, our actions show we are worst enemies.

Every leader, every citizen, and everyone needs to carry out an introspection in relation to the state of things in the country. If we want the situation of thing to remain as they are or nosedive even further, we can turn a blind eye to the ills pervading our environment.

If, however, we crave for a better country, we must all play our parts and do better than we have always done. I believe in change. And I believe Nigeria can be better. That change, however, has to be thorough goingly carried out in every strata of the society including those who should be enforcing the law but are subverting it.

Related tags : The Pandemic That Refused to Go!