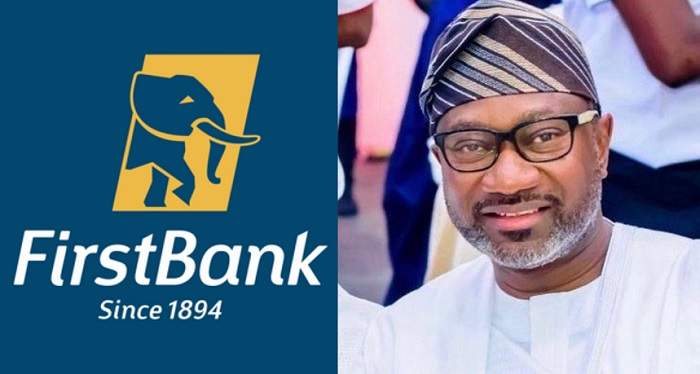 Femi Otedola has taken over First Bank of Nigeria Plc with his recent acquisition of about N30 billion worth of shares, making him the single largest shareholder of the bank.

An exclusive report monitored on The Street Journal by Apples Bite Magazine revealed that Femi Otedola took over First Bank with his recent acquisition of about N30 billion worth of shares, making him the single largest shareholder of the bank.
According to the report, Otedola being the largest shareholder, means he holds the highest voting shares and can dictate the direction of the bank through his voting power.
Recall Otedola divested his 75% direct and indirect shareholding in Forte Oil, via a merger of his company Zenon Oil and former African Petroleum in 2019, the decision raised questions as to why he made such a decision especially because of the lucrative nature of the oil and gas sector.
Otedola singled out First Bank despite having investments in the real estate and financial sector, for the single reason that there wasn’t exactly one man calling the shots there, unlike in other new generation banks, the report added.

Industry assumptions have often suggested billionaire Oba Otudeko is the single majority owner of the bank considering the enormous control he wielded over the bank for years. However, his latest debacle with the Central Bank following the failed removal of current MD/CEO Adesola Adeduntan marked a sudden end to his control of the bank providing an opening for Mr Otedola to move in on controlling the bank.
According to our intelligence, the billionaire through various entities may have acquired over 5% of the bank at an average price of N9 per share. According to Nairametrics Otedola already owns over 10% of the bank.
FBNH currently has a total outstanding shareholding of 39.5 billion units and a market capitalization of N423.5 billion (over a billion dollars assuming official exchange rate). According to information contained in the 2020 FY report of the bank, 40 shareholders owned 31.03% of the bank while no individual shareholder held more than 5% of the bank. Shareholders with over 5% ownership of shares of a publicly quoted company are statutorily expected to declare ownership publicly.
The financial statement of the company also states Dr. Oba Otudeko owns 532 million units or 1.3% holding of the company. Oye Hassan Odukale reportedly owns 370 million units of the bank according to the information contained in its 2020 annual reports. The billionaire owner of Globacom, Mike Adenuga is also a major shareholder of the company but is thought to own far fewer shares than Oba Otudeko and the Odukales. It is also likely that they have other shares owned by proxies but not included in the shareholdings disclosed publicly.