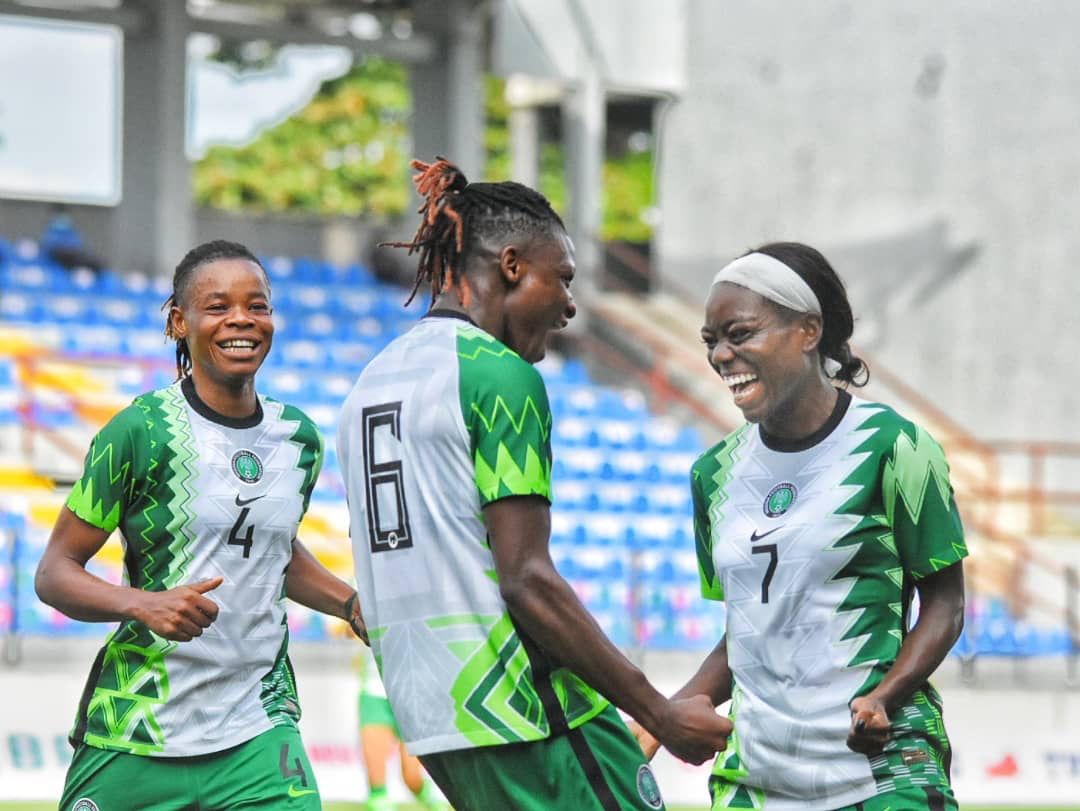 Captain Asisat Oshoala has promised that the Super Falcons will put up a better show when they confront their Ghanaian counterparts at the Accra Sports Stadium on Sunday, in the second leg of their 12th Women AFCON qualifying fixture.

A brace from Sweden –based Uchenna Kanu gave Nigeria a 2-0 lead from the first leg played at the Mobolaji Johnson Arena on Wednesday, but the Super Falcons realize it is not over yet against one of the fiercest rivals of Nigeria in African football. Wednesday’s game happened on the 70th year anniversary of the football rivalry between both West African giants.

“We know that the Black Queens are strong and determined when playing at home. Now, we have to up our game and play like we did not win this first leg. We have to go all out and attack better than we did here. Qualification for the AWCON is non-negotiable,” Oshoala said as the squad met with President of Nigeria Football Federation, Mr Amaju Melvin Pinnick and the General Secretary, Dr Mohammed Sanusi after Wednesday’s encounter.

A record number of 44 entries for the preliminaries means that after the fixture with Ghana, the nine-time champions still have another round to prosecute before being eligible to feature in the finals in Morocco, which will also determine Africa’s representatives at the 32-team FIFA Women’s World Cup finals in Australia and New Zealand in 2023.

That next round could well be against Lady Elephants of Cote d’Ivoire, who mauled their counterparts from Niger Republic 9-0 in their own first leg encounter on Wednesday. The final round of qualifiers comes up in February next year.

The Confederation of African Football has appointed Ivorian officials to superintend Sunday’s clash in Accra between Nigeria and Ghana. Zomadre Sonia Kore will be the referee, with her compatriots Denise Akoua (assistant referee 1) and Ndeko Edwige Appia (assistant referee 2) also in action. Beatrice Gouchoedou from Benin Republic will be fourth official and Latré-Kayi Lawson-Hogban from Togo will serve as match commissioner.