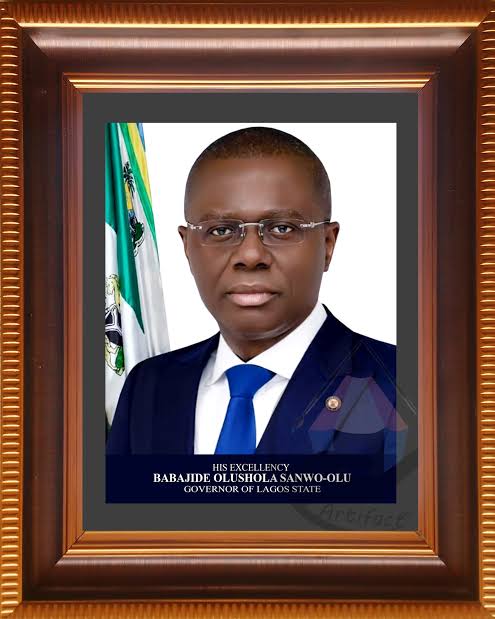 With about 21 months to the end of his first four-year single term in office, as stipulated by Independent National Electoral Commission, INEC, it is a given that Lagos State Governor, Babajide Sanwo-Olu, will clearly aspire for a second term of four years in office, as he is eminently qualified to.

In marketing, there is the school of thought promulgated by David Morgan, a B2B marketing specialist; who once opined that, “If your product (or service) is really good, it should sell itself”. This marketing mantra, down the years, is now an ethos of the profession; lending credence to the fact that once you produce an excellent ware, convincing a prospective customer for patronage would be less hassle.

Like the excellent product described by David Morgan, Governor Sanwo-Olu, by every touchstone is a tested and worthy product, that is sellable for a second four-year term at the Alausa seat of power in Lagos.

In the wake of intra party politics and lobbying ahead of 2023 electioneering, certain names within the ruling All Progressives Congress, APC, have begun to go underway, to build structures that give them a soft landing, in the coming months. This is evident, with the apparent involvement of some of these persons with the just concluded local government election in the state, in July.

Although, grapevine has it that a pact was entered into, between, Governor Sanwo-Olu and power brokers within his party, that forbids him from vying for a second term in office, as he was said to have been construed as a child of necessity, occasioned by the fall out between party elders and his predecessor, ex-Governor Akinwunmi Ambode.

Some blocs have also harangued that, power in Lagos, is rotational between Muslims and Christians, in eight year, two-term turn. They believed that Governor Sanwo-Olu is only completing the remaining four-year term for the Christian sect, the one Ambode couldn’t complete, after which it would be the turn of the Muslims in 2023.

At it’s best, all these conjectures remain what it is, unsubstantiated.

With his impressive dossier, in the past 27 months in office, as chief administrator of a mega city with the fourth-highest GDP in Africa, Governor Sanwo-Olu within a short period has transformed Lagos state into one of the most functional and habitable cities in the world.

Those Fingered to be Eyeing Sanwo-Olu Job

From obtainable indices, members of the Governor’s Advisory Council, GAC, are said to be pleased with Sanwo-Olu’s performance, so far, and do not see a reason why a second term ticket for him should be a subject of debate.

However, insinuations are that, those scheming to take over Sanwo-Olu’s job are Dr Femi Hamzat, deputy governor, Femi Gbajabiamila, speaker of the House of Representatives and Tayo Ayinde, chief of staff.
Others are Tokunbo Abiru, senator representing Lagos East and Hakeem Muri-Okunola, the Head of Service in Lagos.

For Hamzat, it was alleged that an agreement was entered that Sanwo-Olu would serve single-term, after which he would vacate office for his deputy, since he works very closely with Sanwo-Olu, and understands the workings of the office the governor.

Sources within the party tipped that Speaker Gbajabiamila is currently building a financial war chest, and building structures, to throw his hat in the ring for the exalted seat in Lagos.

Sources close to him said, his reason for eyeing the seat is because, 2023 zoning equation may not favor his return as Speaker of the House of Representatives as the position may not be zoned to the South-West.

For Tayo Ayinde, although, he contested the 2014 primary election for governorship in APC, losing to Akinwunmi Ambode, sources close to him said, Ayinde has repeatedly told the governor he has no ambition to be governor. He is quoted as saying “God has been kind to me, and I consider it a blessing to work with Governor Sanwo-Olu, as his Chief of Staff.”

On the part of Muri-Okunola, it was learnt that being an indigene, the first son of the late respected Justice Muritala Okunola gives an edge among elders in Lagos. He is one of Asiwaju Bola Tinubu’s favorite and he is one of those considered as the future governor of Lagos.

Abiru’s elevation as managing director of a bank to the Senate is also seen by some as a ploy by the power brokers in Lagos to groom him politically ahead of 2023 if the one-term agreement succeeds.

An assessment of the THEMES innovative mantra, the contract with which Governor Sanwo-Olu committed himself to the service Lagosians, who trusted him with their votes, one would be convinced that the performing governor has beamed developmental brilliance on every essential sector of the economy, with a promise to further consolidate on his achievements so far.

To rate a performing elected executive, is not so tough, simply compare notes, to see if his administration is in sync with the campaign promises he made, before being entrusted with the office. See, if he walks his talk.

For Governor Sanwo-Olu, THEMES, an abbreviation for Traffic Management and Transportation, Health and Environment, Education and Technology, Making Lagos a 21st Century Economy, Entertainment and Tourism and Governance and Security is the assessment scheme to measure service delivery on the part of his government and the fulfillment of her electoral promises.

Leaving no stone unturned, Governor Sanwo-Olu administration is harnessing all three modes of transportation available; roads, rail and waterways. Lagos under Babajide Sanwo-Olu’s watch has embarked on the massive construction and rehabilitation of roads and has also delivered inherited projects from his predecessor.

The intra-city rail projects – the blue and the red lines- are priorities in the commitment to mass transportation across the state.

Lagos state, under Sanwo-Olu has commissioned over 600 buses under the Bus Rapid Transport system, and has launched the 500 First and Last Mile Buses. The projection is to have in place 5000 FLM buses to cater for inner transportation and replace Okada.

Not less than 20 ferries plying various routes in the state, are currently under LAGFERRY, the agency in charge of water transportation in the state. The agency has 15 jetties under construction to boost its operations.

Recently, WHO Country Representative, Dr Walter Mulombo announced that Nigeria was rated 4th best country, in Covid-19 response; this accomplishment is largely occasioned by how Lagos state, the epicenter of the pandemic
handled enormous challenge, to global admiration and commendation.

The constant communication with the people through direct regular briefings went a long way to reassure the citizens and built the much-desired confidence.

The pandemic had crept in as the government was settling into office, yet, he prove himself, a worthy incident commander indeed; leading from the front, and even getting infected with the virus in the process.

The state government under the auspices of the Medical Project Implementation Unit (MPIU) has commenced the upgrade of infrastructure in the state-owned facilities to build resilient health-care and increase the residents’ access to quality universal health coverage.

The implementation of the health projects cut across the primary, secondary and tertiary health-care system.

So far, Governor Sanwo-Olu’s administration has completed and equipped 2 Maternal and Childcare Centers (MCC) in Eti-Osa and Badagry.

Another 110-bed MCC has been recently completed in Epe.

Among others, the government renovated the Mainland hospital in Yaba with a future plan to converting it to an Institute of Research for Infectious Diseases.

The construction of a 1,500 bed Psychiatric Hospital and Rehabilitation Centre at Ajidun has also been approved.

The state government in collaboration with the private sector has completed and handed over an oxygen plant at the Mainland and Gbagada General Hospitals. In the same vein, Triage and Oxygen Centres in 10 locations across the state have been delivered.

The welfare of health-care workers has also received attention with the construction of a 24-unit Doctors and Staff Quarters at Gbagada General Hospital.

At inception, the issue of the environment was a major challenge to the Sanwo -Olu administration.

So far, the state government has been able to re-energize and re- organize the Lagos State Waste Management Authority (LAWMA) and the Private Sector Participation in Refuse disposal for cleaner Lagos.

The government launched the LAWMA Academy, to provide formal training and certification in waste management. He also expanded the Olusosun Dumpsite to 42 acres to accommodate more waste and ensure that trucks can have a quicker turnaround time.

Education and Technology take a prime position in the present administration. The state government is of the view that quality education is germane to the execution of its various developmental agenda.

Till date, the Sanwo-Olu administration has completed 1,097 projects in 970 schools across the state.

3000 teachers at both primary and secondary schools, were recruited and trained to join the State teaching workforce while those already in service were developed through continuous training to update their skills and knowledge with modern technology.

The state government signed an agreement with six private investors for the proposed LASU 8,272- units hostel.

The government implemented a 3,000km of metro fiber connection across the state to promote security. It also provided a fully digital mapping platform and an integrated end to end land administration system which includes integrated land automation system.

The Lagos State Science Research and Innovation Council (LASRIC), with start-up funds of $687,000 to drive investment in research and development of tech-focused solutions across the six pillars of the administration’s THEMES agenda was set up.

So far, the Lagos State government has delivered 14 housing schemes, adding 7,000 affordable housing units to reduce deficit in the sector.

The Lagos Mortgage Board has strengthened the “Rent to Own” policy to provide many residents especially first-time home-owners with the desired opportunity.

There’s no gain- saying the commitment of the state government to grow the agricultural sector to promote food security. In line with this, the 5 years Agric road-map was launched.

The government created the Eko Farmers’ Market to deliberately provide ready-made off-takers for farmers to dispose of their products on regular basis.

The EndSars protest, unfortunately, left in its wake unimaginable destruction and developmental set-back. However, the state is rising above the ashes.

The negative impact of the pandemic on the economy and livelihood took a prime position of concern in the governance of the state.

Mr. Governor, rather than brood on the colossal losses rallied the citizenry to rebuild, regain and restore the state. The sheer audacity of the leadership naturally attracted support from all and sundry across the nation. The state is not only on course for restoration but looks to end up in the fullness of time like the proverbial palace destroyed by an inferno. The State Government has extended its milk of kindness to mitigate personal and corporate losses.

3,673 businesses were supported with #1.156B and a plethora of interventions including grants, mentorship, business advisory, capacity building and market access opportunities.

1,835 businesses were supported with #939.97M and saved a total of 10,000 direct jobs and 40,020 indirect jobs via the MSME Recovery Fund which was an intervention program to cushion the effects of the Covid-19 pandemic and the EndSars protest.

The Lagos Economic Acceleration Programme (LEAP) to reduce the effects of the pandemic on small businesses.

A #5B EduFund in partnership with First Bank Plc and EdFin FMB and a #1B fund targeted at businesses in the tourism, hospitality, entertainment, arts and culture sectors was set up.

Just halfway gone, the score sheet of Governor Sanwo-Olu already swallows up some other people’s eight years achievements. This speaks for why he is admired by his contemporaries among league of serving governors in Nigeria.

With a brilliant first term still in works, Governor Sanwo-Olu sure deserves a second term in office, to consolidate on his initial gains.