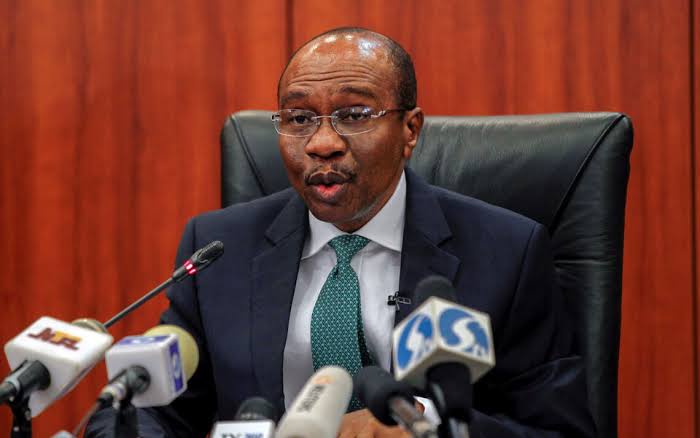 Godwin Emefiele assumed duty as the Governor of the Central Bank of Nigeria (CBN) on June 4, 2014 after the sack of former Governor of the bank, who later became the Emir of Kano, Lamido Sanusi Lamido, by former president Goodluck Jonathan.

Lamido has since been deposed as the Emir of Kano.

Since then, Emefiele has been administering the economy of the country as the Governor of the Apex Bank.

He was given an opportunity to serve for second term after the expiration of his first tenure by President Muhammadu Buhari about three years ago.

But this has not changed the opinion of millions of Nigerians, who believe that Emefiele has run the economy of the country aground as the CBN Governor.

They condemned his monetary policy, fiscal and forex policies and the alleged bucks passing over the high exchange rates in the country.

They gave an instance of the exchange rate, which was less than N200 to a dollar, when Emefiele took over at the apex bank to about N600 to a dollar at the moment.

That apart, an instance was also given of the inflationary level in the country that people have described as hyper inflation.

According to an economist, Emefiele has not done well as the CBN Governor and now “he wants to be the president of Nigeria.”

The economist, Mr. Kunle Ajao expressed surprise that Emefiele collected N100 Million Naira nomination and expression of interest forms of the ruling All Progressives Congress (APC) last week, wondering why he thought he could do well in the office after “failing as the CBN Governor.”

Also speaking, Mr. Uche Nnamdi, a resident of Port Harcourt in Rivers State, warned Nigerians and the APC against entrusting the “future of the country in the hands of a charlatan, who has nothing to show for his years as the Governor of the CBN,” adding that Emefiele is the worst of the numerous aspirants running for the coveted office.

Speaking about his ambition, Emefiele had said that;
“I am humbled by the growing interest of those asking that I run for the Office of President in the 2023 general elections: I have not come to that decision.

“I note and salute the sacrifices of those farmers and patriots going as far as raising personal funds and offering me Presidential Nomination Forms: I thank them most profusely.

“However, should I answer their calls and decide to seek presidential nomination, I will use my own hard earned savings from over 35 years of banking leadership to buy my own Nomination Forms, without proxies in an open and transparent manner in full compliance with the laws and Constitution of The Federal Republic of Nigeria.

“And should I not run for elected office, I will continue to serve and sacrifice for the good people of Nigeria under the able leadership of President Muhammadu Buhari. This is a serious decision that requires God’s Divine intervention: in the next few days The Almighty will so direct.”

But this statement has been described as hypocritical by many Nigerians, who said it was a mere pretence from Emefiele, adding that his eyes are on the coveted office.

Ondo State Governor, Rotimi Akeredolu, said on Friday that entry of Godwin Emefiele into the presidential race while remaining as CBN governor “portends great danger to the fragile economy of the country.”

Akeredolu said news of Emefiele’s buying of the nomination form “has been received with palpable disbelief and shock by many Nigerians.”

He added: “Rumours had been rife on the subterranean partisan activities linked to him through these shadowy characters in the recent weeks. Pictures of branded vehicles, ostensibly purchased for electioneering campaigns, were also posted on the social media. The audacious moves by those who claimed to be supporting this interest have been unsettling.

“This latest news confirms that the Governor may indeed be interested in immersing himself in the murky waters of politics like any other Nigerian with partisan interests. It is incontrovertible that Mr Emefiele enjoys a constitutionally protected right to belong to any group or association and participate fully, just as any Nigerian.

“It is, however, difficult to imagine that a person who occupies the exalted and sensitive office of the Governor of the Central Bank of Nigeria will be this brazen in actualising his ambition.

“There is no gain asserting the obvious. The combined effect of the Public Service Rules, CBN Act and the 1999 Constitution, as amended, exposes not only the oddity inherent in this brash exercise of presumed right to associate. It also confirms the illegality of the act should he proceed to submit the forms while occupying the seat as Governor of the Central Bank of Nigeria.

“Consequently, we admonish Mr Emefiele to leave the office, immediately, for him to pursue his interest. He cannot combine partisan politics with the very delicate assignment of his office. Should he refuse to quit, it becomes incumbent on the President and Commander-in-Chief of the Armed Forces to remove him forthwith.

“This is a joke taken too far.”
Akeredolu appeared to have expressed the views of many Nigerians, who insisted that Emefiele would never be a good president and urged him to wait for the expiration of his term as the Governor of the CBN and leave the seat for “a more creative fellow.”

They said that allowing Emefiele to emerge as the president of Nigeria would be the worst decision ever taken by President Muhammadu Buhari, who they advised to throw his weight behind “a credible and intelligent candidate for the 2023 general elections under the APC.”