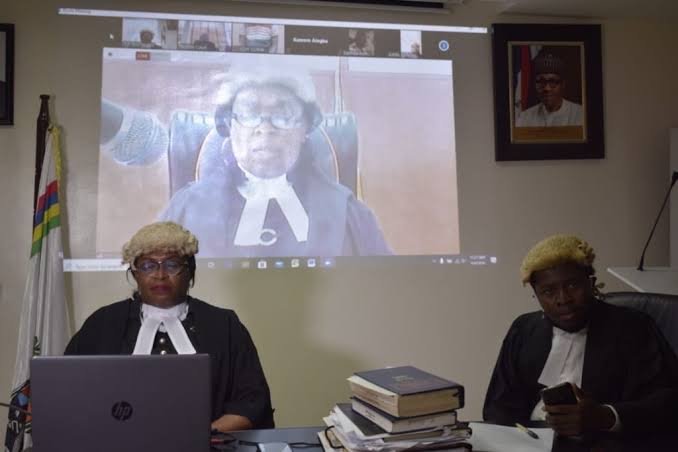 Sequel to the disruption of legal proceedings nationwide by the novel Covid-19 pandemic, there has been a clamour for virtual court sitting in order to hear and determine legal matters accordingly but this time, not in the physical courts but with the aid of technology and video conferencing. This innovation has led to an initial test-run of the virtual court trial in some states like Lagos, Ogun and Borno with other states warming up to take a bite.

Some renowned legal practitioners have applauded this new development as it displays the dynamic nature of the law to meet with changing circumstances while others have shown their utmost disapproval of the entire process on the grounds that itcontravenes the right contained in Section 36 (3) and (4) of the 1999 Constitution of the Federal Republic of Nigeria (as amended) – the right to public trial. This article tends to find out whether the virtual Court sitting amounts to a contravention of the constitution.

The proceedings of a court or the proceedings of any tribunal relating to the matter mentioned in subsection (1) of this section (including the announcement of the decisions of the court or tribunal) shall be held in
Whenever any person is charged with a criminal offence, he shall unless the charge is withdrawn, be entitled to a fair hearing in public within a reasonable time by a court or tribunal: Provided that
A court or such a tribunal may exclude from its proceedings persons other than the parties thereto or their legal practitioners in the interest of defence, public safety, public order, public morality, the welfare of persons who have not attained the age of eighteen years, the protection of the private lives of the parties or to such extent as it may consider necessary by reason of special circumstances in which publicity would be contrary to the interests of justice;
If in any proceedings before a court or such a tribunal, a Minister of the Government of the federation or a commissioner of the government of a state satisfies the court or tribunal that it would not be in the public interest for any matter to be publicly disclosed, the court or tribunal shall make arrangements for evidence relating to that matter to be heard in private and shall take such other actions as may be necessary or expedient to prevent the disclosure of the matter. [Emphasis mine]

Very senior legal practitioners have relied on the above provision to contend that virtual court sitting is bereft of constitutionality for not being held in public. They have voraciously cited cases where the court overturned proceedings held in the judge’s chamber as not qualifying as a public place; if such matter does not qualify as matters that may be heard in chambers. One case relied on by this group isOviasu v. Oviasu (1973) 11 SC187. In that case, a hearing of the matrimonial case took place in the chambers of the trial judge. Neither of the parties nor their counsel requested for this. At the end of the hearing, the trial court dissolved the marriage. On appeal, the Supreme Court allowed the appeal, set aside the judgment and the matter was ordered to start de novo. It was added that a court is a public place where members of the public have unfettered ingress and egress.

Similarly, in Nigeria Arab Bank Ltd. v. Barri Engineering Nig. Ltd.(1995) 8 NWLR (pt. 413) 257 @ 273 judgment was delivered in chambers at the High Court in a claim for damages. On appeal, the judgment was declared a nullity and a retrial was ordered. The court further added that the right in section 33 (3) of the 1979 constitution now section 36 (3) 1999 constitution “is a public right of every citizen. The courts must be opened to anyone who presents himself or herself for admission or is so obliged to be so presented.”

There is one underlying principle with respect to right to public trial stated by the Courts and that is: that the court proceeding must be held in a way that allows members of the public (who are interested) to stroll in and observe the proceeding.

The Black’s Law dictionary defines a public trial as an open court where people can witness the proceedings as long as they show reasonable behaviour.

The Constitution does not define a public trial specifically but from the interpretations of the court, it presupposes that what is meant by a public trial is not in the strict sense the Courtroom necessarily being opened to the public alone, if it were so, then trial in camera would be illegal (of course that counts, but it is not limited to it alone). Rather it means that every trial must be done in a way that allows members of the public interested to observe the proceedings. Therefore, to determine whether a trial is unconstitutional on the basis of not being public, the question to determine is whether the trial by its arrangement has facilitated/deprived members of the public from joining and not necessarily whether it was done in the Courtroom.

Does Virtual Court sitting allow members of the public to observe the proceedings?

It has been argued that the largest Courtroom in Nigeria can accommodate not more than 500 members of the public at the same time to observe court proceedings. This is reasonably a generous estimation considering ventilation and the conduciveness of the courtroom. On the other hand, a virtual Court sitting using a video conferencing device like Zoom can accommodate thousands of participants to watch live a court trial. The question that begs for answer then is: Which of the two modes is more public?

The drafters of the constitution did not make it a strict principle that sittings must be held only in the “courtroom”; that is why same can be done in chambers and even in the locus in quo. The concern there is that members of the public must be free to enter or exit. That is the ingredient necessary to make such trial pass the test of being public.

It is necessary at this point to show the distinction between Oviasu v. Oviasu[Supra]andNigeria Arab Bank Ltd. v. Barri Engineering Nig. Ltd.[Supra]on the one hand and virtual court sittings on the other. In the former, the public was apparently prevented from observing the proceedings when it was held in the chambers. This is not the case with virtual court sittings as it allows the general public to participate. It has been estimated that over 25 million Nigerians have more chances of joining a virtual court trial.

Is Virtual Court sitting a bed of Roses?

I am not unmindful of the several challenges regarding electricity, technology and illiteracy affecting Nigeria. I am also not unmindful that the early years of this programme may not be totally smooth because of these challenges, but the Constitution does not make a virtual court sitting a nullity on the grounds of not being public.

I am not also unmindful that some procedural laws and the Evidence Act probably has not expressly contemplated a virtual court procedure, but I am confident that change is the only constant thing and the next opportunity the legislature would have would be directed at making procedural laws that would allow virtual court sittings synchronize perfectly to the legal system

As the world keeps changing and growing, we must not be clogged by our own legislation. Law is organic. It should grow. It should adapt. It should not be a static rock. It should not remain in perpetuity without being broadened or narrowed to fit into changing times. These are desperate times and they call for desperate measures of adaptation. Adapt or die. Our legal system either adapts or dies.A virtual court sitting indeed meets all the requirements of a public trial and cannot be set aside on that basis.

Precious Okoh is a legal practitioner called to the Nigerian bar.

He is passionate about commercial litigation, Arbitration and Dispute Resolution and very curious about digging into novel fields of law like technology, artificial intelligence and Energy law. He is influenced and motivated by Noah Rubins QC (Partner, Freshfields Bruckhaus Deringer).

Share this post
Related tags : Is Virtual Court Sitting a Breach on the Constitutional Right to a Public Trial?