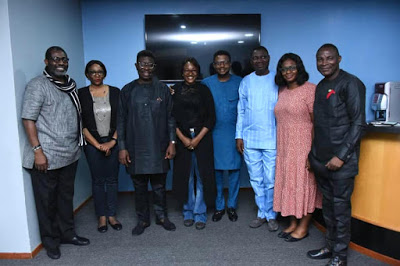 The event was held at the MultiChoice headquarters on Tuesday, April 13, 2021 in Victoria Island, Lagos state.

This is to reiterate the new executive members’ commitment to shared values and the guild’s innovative strides following a successful restructuring process, which has delivered a new leadership. 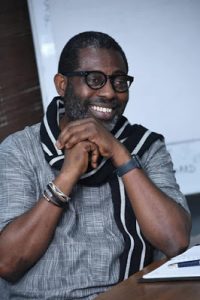 DGN President, Sir Victor Okhai appreciated and commended MultiChoice Nigeria for their efforts, visions and widespread support for creativity, which others failed to see that fuel the passion of resourceful entrepreneurship in Nigeria, and Africa. “I think this is an idea whose time has come, because there is a synergy amongst us all. I am happy to be here for this strategic partnership which will foster excellence as there are no two standards in filmmaking.”

Expressing faith in the new leadership, Multichoice Talent Factory Academy Director, Mr. Femi Odugbemi who emphasized his excitement to meet with the DGN said current realities and changes have made it imperative to have direct interface with the industry, particularly in the digital space. He went on to say the MultiChoice Talent Factory project was introduced to the last administration of DGN with the intention to have a partnership, but some how it didn’t sail through.

“We are not strangers to the Directors’ Guild of Nigeria. That is the creative equity of the industry. When the MultiChoice Talent Factory started, we brought DGN along as we planned it. Some how we were not able to quite find ourselves; we proceeded and then nothing happened. The fact that we consulted with DGN at the beginning of the Talent Factory tells you that everyone on this side of the table have a clear understanding of the strategic importance of DGN to the Talent Factory initiative,” 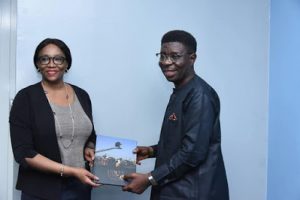 President Okhai who had a history with MultiChoice from the New Direction days went down memory lane recounting his experience as an alumnus of the first MultiChoice / Mnet original production, Doctors Quarters where he was the assistant director. He was also part of those that were trained for daily soaps in South Africa.

“I was part of the 14 Nigerians that were trained for daily soaps, including Mr. Femi Odugbemi to come back and start ‘Tinsel’. I am like an alumnus that has come back home. I’m so happy about this strategic partnership because it is of interest to me and of mutual importance. The way you affect society is what makes the difference.” The President primed.

The President assured that DGN, as a guild would work with MultiChoice Nigeria as partners for a mutually beneficial relationship that will advise and help all practitioners. “As we partner, we want to see growth and not a parasitic relationship. We are very much interested in the Talent Factory both as participants and facilitators, and also getting the MTF graduates to join us as members. Since we are both very keen on capacity building, this will be a win-win.”

Similarly, Executive Head, Corporate Affairs, MultiChoice Nigeria, Caroline Oghuma highlighted that the MTF is resolute to ensure good public relations, and talent development which are the flagship of the organisation. She emphasized on the focus of their achievement is to build better crop of filmmakers and igniting Africa’s creative industry owing to a few success stories from their alumni.

“The returns for now shouldn’t be the focus but the quality, and along that journey is the partners; the people that help you get where you’re going. That’s part of the ecosystem you’re building together for the future. We are very much on same page in that regard, that’s why from the beginning, we involved the Directors’ Guild of Nigeria and other industry practitioners because we can’t do it alone. We want people to benefit and give back. So I’m very grateful again for the opportunity for us to reopen this conversation, and believe me, everyone is on board.” She explained.

DGN National Secretary, Uchenna Agbo extended cheers to MultiChoice Nigeria for the invitation and accentuated on the relationship and benefits of the mutual partnership. He proposed an agreed take off even though not holistically achieved at one meeting. “The MTF gives me personally confidence that the African filmmakers are beginning to get it right, since there is no expatriate seated among us. Our members are going to be excited seeing that someone with this kind of vision is at the helm of affairs. There should be pointers for a take off with an agreed immediate and long-term actionable plan for future results in mind. Most of our members need training and others are also qualified to train too. However, it all boils down to what MultiChoice really want from us, and what we too want from them so that we can globally compete favourably.”

Odugbemi who was thrilled vis-à-vis the timing of the DGN executive to the partnership meeting assured both parties of having what it takes to improve on the strong brand that the company has built over the years. He stated that the business of a directors’ guild is a very serious business, and not the business of money, but about the creative equity of a country. “Everybody keeps talking about who will win an Oscar. That doesn’t happen overnight. It happens when you build creative equity and that is not built through competition between one guy and another, or through anointing one person or another as our best filmmaker. Creative equity is built generationally.” He asserted.

The MTF Academy Director advised filmmakers to know what is relevant to the success of their future by understanding the junction between their creativity and the audience by building a brand out of it in an industry that already has a commercially viable ecosystem. ”The business of filmmaking is wrong in the industry because 80% of the film made don’t make money. Not because the audience is not there, but because somehow there is no business plan. We have a lot of successful filmmakers, but not many successful creative entrepreneurs”.

He equally charged DGN not to handicap their creativity, but diversify and procreate what makes the creative entrepreneur works by bellowing against a particular genre and the absurdity the industry promotes because they are in charge of the creative equity.

“Where is the power of the industry when it is all in one basket? We want people to make comedy, but we don’t want people to make only comedy. If there is anything this industry needs now is a DGN that understands the vision and speaks up when different voices are talking about creative direction. All genres have audiences. It is important that the DGN is able to engage necessary institutions in achieving this creative direction.” He affirmed.

According to him the present trend is just a sign of how badly we have misdirected training and mentorship, which is why this partnership with DGN is critical, since the industry is manufacturing a younger generation faster than our older generation can die.

He informed that the MTF is not the only training institution but he trusted they have the clarity since MTF is the only training institution that ensures students are not distracted while getting paid, accommodated, pampered, receive intensive trainings, learn the business, finance, distribution and interact with people relevant to their studies. There is no need putting a ceiling to creativity by defining an individual path to success.

Odugbemi said: “We are in an industry where there is no senior colleague. There are first time filmmakers who have amazing works just like there are older filmmakers who make craps. As far as I am concerned, if there is anything the industry really need now, is a DGN that understands the vision and speaks up when different voices out there talking about creative direction. The industry needs creative direction and less competitive nonsense surrounding what came out of theatre by defining how many tickets a film sold.”

The MTF boss encouraged the guild to be interested in the curriculum of film schools in Nigeria by engaging these institutions with an open coordinated national curriculum for standardization, and make it better since not everyone can be admitted into the MTF.

He reiterated his regard for the new DGN. “I really have a lot of respect for this new DGN, and I say it so you can understand why this engagement is important. So please, I have also spoken behind you, about you and the seriousness of the team that I see. I believe you have a lot of low hanging fruits, quick wins, and it all surrounds what kind of conversation is coming out of it. This is the first step, but relationships are built over time. They’re not constructed as transactions. Any of your questions will be responded with 24 hours maximum. What make a partnership work is inviting people from your end who are part of it as an eye on the inside to advise what works best for the industry.”

Lagos State Secretary, Directors’ Guild of Nigeria, Judith Audu-Forte thanked MultiChoice for opening their doors for DGN, and furthermore disclosed her exhilaration when President Okhai informed her of the visit as capacity building would be fantastic for the entire industry even though many lie to themselves about the pros of filmmaking.

“I’m really glad and excited about this visit and the future of DGN. Back then I queried why Africa Magic was boldly crested on my DGN jacket after the induction, and not just DGN, but this makes sense, and it’s only normal that this happens. The industry needs a lot of training, even though we lie to ourselves due to ignorance. We have a lot of people that want to be what they want to be, but they have no clue what exactly they are supposed to be doing.” She said.

The ecstatic DGN President who referenced his manifesto assured them of the guild’s strategic readiness to deliver remarkable values to the stakeholders without compromising sustainability, and expressed his delight of being on same page with MultiChoice to leverage every opportunity in terms of technological creativity to grow volumes and revenue. He educated that the guild would be having an important marriage between town and gown, and an annual lecture series.

“The guild has not scratched the capacity they have at all. Our stories are told be people outside, whereas the pioneers who were here are still here with us alive. For your information, the guild has no less than eight professors and a few PhD holders in film who are members of DGN. We want to also create an opportunity for those in the academia to start a local journal to document our industry and what we do.” The President stated.

The President poised that DGN has a vision to create a new Africa inspired by colours. It is understood that the Multichoice Nigeria intends to accomplish the vision by providing creative workshops, be they individuals or corporate bodies with products and services to help them create colourful and exciting spaces.

“Yes, the recruitment process in the film industry may be faulty, but what will remain faulty is if you do not build capacity. They may not have it all, but you must build capacity and make sure you lay down standards to be able to compete globally.”